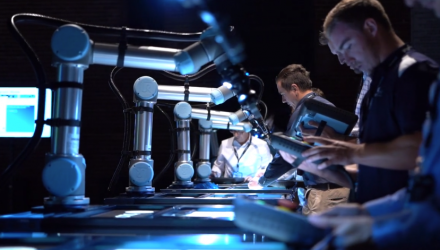 How Robot Co-Workers in Future Will Gain Our Trust

Would you trust a co-worker who had proved themselves to be unreliable? It’s a problem which we will almost certainly face with our robot co-workers in the near future.

Modern cobots are only collaborative in the sense that they can operate around humans without the need for safety fences. They won’t harm a human co-worker but that’s as far as it goes. If we were to apply the same definition to our human co-workers, we wouldn’t call them “collaborative,” would we? Not harming your colleagues is surely a basic requirement for being a human being!

Collaborative (adj): “produced by or involving two or more parties working together.”

In this sense, cobots are have a little way to go until they are really collaborative. However, advanced collaboration between people and robots is not too far away.

Before we start to truly collaborate there’s something we need to sort out first.

How will robots and humans communicate their reliability to each other? How will our robot co-workers show us that we can trust them to do their jobs reliably?

Although this situation is still a little way in the future, researchers are already looking for the answers.

Why trust is the key issue in human-robot teams

Last year, a warning was published in the journal Ergonomics by psychologist Prof. Peter Hancock. In it, he warned that the new autonomous technologies need more research into “human factors” — a discipline which examines the interaction between humans and technology.

Trust is a big reason that this research is necessary.

If a robot behaves unpredictably, it will surprise its human work-mates. These people will lose trust in the robot. They will become nervous about what the robot will do next. As roboticists, we might not be too concerned by this situation — we know that we can just identify the problem in the robot’s programming, fix it, and happily reboot the robot. However, other workers may not be so understanding.

Robots will need ways to actively repair the trust that is lost when they “misbehave,” as a group of psychologists explained in some follow-up research to Prof. Hancock’s warning. Perfect autonomy, they argue, is not possible in real industrial situations. Human workers will have to deal with unexpected events relating to the robot many times a day.

In the near future, any robotic system will need ways to quickly repair its co-worker’s trust in its abilities so that the human-robot team can get back to work.

How human teams build trust between each other

How can a robot communicate that it is trustworthy to its human team members?

The answer to this, we need to look at how we, as humans, build trust with each other when we are working together.

Rapport (noun): “a close and harmonious relationship in which the people or groups concerned understand each other’s feelings or ideas and communicate well.”

Rapport has been shown to be essential for effective work and worker satisfaction.