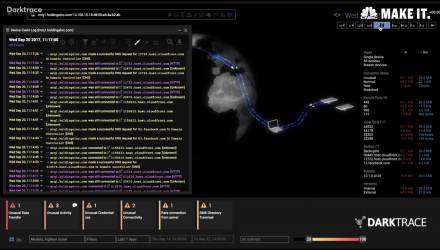 How $1B Startup Darktrace Uses AI to Fight Cybercrime

As companies and individuals further their reliance on digital data, cyber attacks become all the more common. In 2017, it is estimated that 179 million records were exposed in the U.S. through almost 1,600 different data breaches, with the business sector being the most frequented target.

“Evolved over billions of years, the human body’s immune system has a unique ability to understand ‘self’ – what is part of us and what is not us – allowing it to rapidly detect and contain emerging threats, even those our body has not encountered before,” Eagan said in a CNBC interview.

Darktrace’s AI uses machine learning to understand and recognize normal activity by each device connected to a company’s network. Upon identifying behavioral deviations, the AI will then, like a “digital antibody,” neutralize any threat before damage is caused.

Darktrace was founded in 2013 and is currently valued at $1.25 billion. Darktrace is deployed in over 7,000 enterprises worldwide, with some users including the Drax Power Station, the UK’s largest power plant, eBay, and T-Mobile.