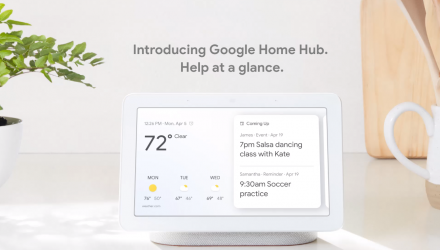 Google’s New Smart Home Hub: What You Need to Know

People who avoided buying Google Home smart speakers because they preferred a device with a screen are in luck.

Google recently announced its Google Home Hub, which works like one of the brand’s speakers but has a seven-inch, touch-sensitive screen.

People can buy it for $149. The company is taking pre-orders now and will start shipping the devices on October 18. But is the gadget worth the money? Let’s take a look at some facts about it.

It Controls Other Home Products

When people swipe down from the top of the Home Hub screen, they can see a menu of available connected devices. Then, it’s possible to control those devices with voice commands or screen shortcuts. The buttons on the screen change depending on the devices people have connected.

Before people attempt to link other smart home products with Google’s hub, they must make sure all the devices are on the same Wi-Fi network. They also need to download the Google Home app. It’s gotten a recent revamp that displays connected smart home gadgets through a control-center-like interface.

Other than that, users don’t need to worry too much about the possibility that the gadget won’t work with other smart home brands they own. According to Google, the Home Hub is compatible with more than 5,000 products and in excess of 400 brands.

It’s worth clarifying, though, that tech-savvy users who think of smart hubs as “bridges” that let Wi-Fi-enabled devices connect with apps won’t use Google’s hub in the same way. It accommodates smart home gadgets, but not in the traditional sense that other hubs do.

It Automatically Showcases the Best Photos

Something that sets the Google Home Hub apart from the brand’s smart products without screens is that it lets people enjoy photo albums they can pull up on the device via voice commands. There’s also a Live Albums feature that automatically chooses the best recently taken pictures and shows them off.

It Features the Google Assistant

Such flexibility caters to people who might not yet be accustomed to using voice-enabled gadgets. The inclusion of the Google Assistant means that people who already know some useful Google Home skills that they trigger with their voice can use them on the Hub as well.

The Device Doesn’t Have a Camera

Although the Google Home Hub works well for looking at pictures, it doesn’t let people take selfies while using it or communicate with loved ones via video calls because there’s no camera. Google reportedly decided not to include one so that people could feel at ease using it in private areas of their homes, such as bedrooms.