You are at:Home»Robotics & AI»Google AI Will Call & Book Your Appointments 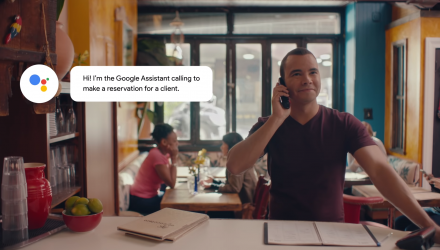 It comes without question that a big part of getting things done requires making phone calls. From booking restaurant reservations to hair appointments to automobile check-ups, much of daily business is conducted over the phone.

In fact, “in the U.S., sixty-percent of small businesses don’t have an online booking system set up,” said Google CEO Sundar Pichai. “We think AI can help with this problem.”

Last month at Google I/O, the tech giant’s annual developer conference, Pichai introduced Google Duplex, an AI voice assistant designed to make calls “seamlessly and in the background” for you. Although it has been under development for years, the software is still in its early stages, and Pichai gave a brief presentation showing how it works. The demonstration played real phone conversations that Duplex carried out with a hair salon and a restaurant, in which it made appointments based on the user’s availability.

The “ums,” “ahs,” and “mm-hms” within the AI assistant’s speech pattern is what makes the project both remarkable and impressive. Google is paying extreme attention to detail with regards to language tics, known as “speech disfluencies” in linguistics, in hopes to further the human-to-robot conversation and make it as natural and comfortable as possible. Scott Huffman, VP of Engineering for Google Assistant, emphasized that these disfluencies are not added to trick anybody, but rather because the ums and ahs in speech “play a key part in progressing a conversation between humans.”

The Duplex demo at Google I/O last month both wowed the crowd and raised concern. Since its introduction, Google has added new measures to make phone calls as transparent as possible by having the assistant offer disclosure to the human receptionist at the start of each call. In Google’s official debut video of the software, Duplex makes it clear, in a natural conversational manner, that it is in fact not a real person, first by introducing itself as “the Google Assistant” and following with “um, this automated call will be recorded.” Pichai recently published a blog post about Google’s AI principles as it continues development.