You are at:Home»Robotics & AI»Avoid This Common Robot Deployment Mistake This Year 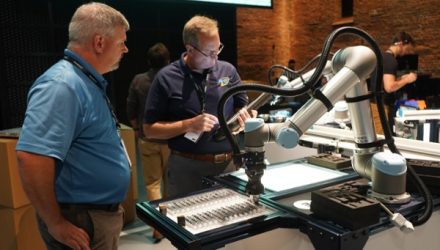 “It’s just too much work! It’s too complicated!!!”

Have you ever heard yourself say this when considering a new project?

Many of us try to start new projects at this time of year. It’s natural. With the New Year comes the promise of 12 new months of progress, productivity, and prosperity. We look at all the possibilities of robotics and we think “This year, I want a piece of that!”

The problem is that we often over-complicate things, especially when it comes to robotics. We try to take on too much at once and, as a result, we end up worse off than we were before.

Over the last 3 years, my New Year’s Word (I don’t do resolutions) has been exactly the same every year. That word has been: “Simplify.”

If you want success in your robotics projects this year, I’d suggest that “simplify” should be your New Year’s Word too. Because over-complication is one of the biggest roadblocks to deploying robots to your business.

Why We Over-Complicate Robotics Solutions

The world of robotics is filled with complex solutions to over-complicated problems.

When I was a robotics researcher, I saw a lot of projects which made me think “Why go to the bother of making a robot do that!?” Often, there was a much simpler solution to the problem which the researchers were trying to solve. For example, researchers might spend years developing a complex algorithm to allow a robot to pick up a badly placed object. When it was finished, the algorithm would still take 10 minutes to pick up the object. Better part presentation would have solved the problem instantly.

Of course, utility isn’t always the point of robotics research, but it certainly is for those of us who want to use robots to improve productivity.

Unfortunately, this tendency to over-complicate problems is not limited to robotics research. It also turns up in industrial robotics. We tend to pick more complex problems and solutions without recognizing that simpler alternatives are available.

An Exercise: Try to Solve This Robotics Problem

Here’s a mental exercise that you can try :

Try to think of at least one solution to this problem before you read further.

The solution doesn’t have to be perfect or detailed, just think of the rough steps the robot would make.

Give yourself 2 minutes maximum to think about it now.

How Did You Solve the Problem?

Here’s one example of the steps we could try to program into our robot arm. I think that many of us would choose a solution a bit like this one on our first try.

Pick up the pan with the gripper and place it onto to the cooker. Turn on the cooker ring. Open the box of eggs and slowly lift it out an egg (using the 3-Finger Gripper as it’s best for spherical objects). Gently break the egg on the edge of the pan and open its contents into the pan. Put down the shell, pick up a whisk and make a whisking motion in the pan to mix the egg. Wait for the egg to cook. Put down the whisk and pick up a spatula. Pick up the omelet and place it onto a plate.