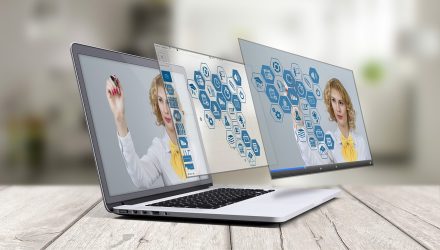 An ETF to Target the Growth Opportunities in Augmented Reality, Virtual Reality

Augmented reality and virtual reality are opening up opportunities for ETF investors to capitalize on a digital world, and at the same time, generate real profits.

On the recent webcast (available On Demand for CE Credit), The Next Evolution of Computing: Investing in Augmented and Virtual Reality (AR/VR), Bryce Tillery, CEO of Eve Capital, explained that augmented reality takes our current reality and adds something to it while virtual reality is immersive or able to transpose the user. With virtual reality, you can swim with sharks. With augmented reality, you can watch a shark pop out of your business card.

The AR/VR “technology is potentially as revolutionary as the smart phone,” Tillery said.

For example, Boeing cut wiring harness build time by 25% and reduced errors to 0 by employing a smart glass (AR) solution for its wiring harness technicians. Boeing refers to the improvement as a ”step function change”. One can imagine the hurdles of putting 130 miles of wire into every 747-8 freighter. In the past, they used giant books full of diagrams, and then moved to laptops.