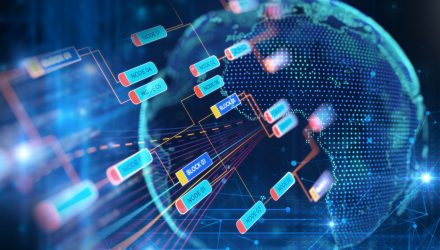 Artificial intelligence (AI) and blockchain are arguably two of the most discussed technologies in the tech sector, but people often talk about their promise and potential uses separately. The likely scenario is that the two technologies will eventually merge.

The marriage of AI and blockchain is still largely speculative because possibilities remain in their early stages. However, there’s already a marketplace called SingularityNET that functions as an AI community where people can earn cryptocurrency tokens in exchange for doing work on AI projects. In short, SingularityNET is built on blockchain technology, and it attracts AI developers.

Supporters believe that this setup could increase the overall speed of AI development and bring AI projects to the market sooner than they might arrive through more traditional means. That’s because SingularityNET is a decentralized marketplace, and people can swap solutions with each other to earn cryptocurrency called AGI tokens.

If this arrangement continues and thrives, it could encourage more collaboration between AI developers. Then, challenges might be overcome faster than usual thanks to the pooling of numerous people working on one problem and giving their input. Advocates also say that these online marketplaces could break the hold that big tech brands have on AI technology.

The mining of cryptocurrencies is central to the blockchain because the goal of miners is to verify entries on the blockchain’s digital ledger. Bitmain is a leading manufacturer of cryptocurrency mining software, and it’s venturing into AI technology too. Specifically, the company is integrating chips that facilitate deep learning processes into its hardware.

According to the company’s CEO, up to 40 percent of the company’s revenue could come from its AI division in five years. Bitmain is a Chinese company, and the Chinese government is not warmly receptive to cryptocurrencies. If the business becomes well-known for its AI technology, it could continue to succeed outside of China by marketing to people in other countries.

At this time, it’s difficult to say how AI might impact crypto mining. However, there’s a good chance such an improvement could make the task more efficient and accurate.

Analysts are also hopeful that AI and the blockchain could be used together to facilitate achievements in the medical and scientific realms. They’re especially concerned with how blockchain could impact computing power and result in transparent AI algorithms that preserve privacy.

Many of the research efforts in science and medicine are incredibly power-intensive, and without access to adequate resources, progress may come to a halt. However, marketplaces exist where people can acquire available GPU power from people willing to give it up. They’re typically decentralized destinations that use blockchain to organize a system of authority.