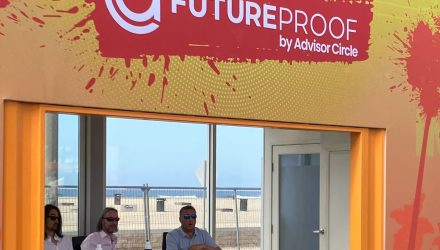 In a live Future Proof recording of The Sherman Show, hosts Jeffrey Sherman and Samuel Lau sat down with Chairman and CIO of Ritholtz Wealth Management Barry Ritholtz.

Sherman asked Ritholtz the inspiration behind Future Proof. “We’re all locked down, stuck at home for two years. The thought of rolling into a hotel board room or, god forbid, the Javits center – no thanks!” Ritholtz said that having an entirely outdoor festival opened up the door for an unconventional conference that featured a wide, diverse group of experts and perspectives.

Asked about the name Future Proof, Ritholtz  said, “that was the concept – How do you avoid having the world pass you by?”

With another unruly inflation print and battered markets, Ritholtz noted that just thinking about the recent downturn is a limited perspective. “Markets go up and down,” he said, noting that record gains last year more than makeup for the current struggles. “Eye on the prize – and that’s five or ten years out.”

Lau asked Ritholtz what he would advise people on the cusp of retirement. Ritholtz said asking people with one foot out the door of their career to work longer is unreasonable. He spoke to the impulse to change up investment strategies as retirement approaches, “at a certain point, alternatives to traditional treasuries start to look attractive.” He rejects the idea that retired people shouldn’t have equities.

Looking at the market turbulence around inflation, Sherman questioned where the opportunities lie today. Ritholtz thinks that the economy is more fundamentally sound than many credit it for once you look under the hood. He also doesn’t think the Fed is looking at inflation properly. “As a group, inflation expectations have been consistently wrong forever,” he said. “If your model requires an input that you know is wrong, the problem is your underlying model.”

Sherman noted that the Phillips curve is flawed and the Fed’s focus on unemployment as the only tool to fight inflation is misguided.

“I’m not a Fed hater, but we have to live in the world we’re in,” Ritholtz said. “The Fed is a constant. We know they are going to make a mistake.” Ritholtz says the Fed’s inflation research is pretty solid, but they don’t always listen to it. He sees humans as prone to emotional decisions. When markets are up, people feel like they are risk tolerant. When markets are down, suddenly, everyone is a conservative investor.

Ritholtz thinks that advisors can strive to help clients understand that the market will go up and down and not panic when things are bad or anticipate good performance will last forever. “People are smart when you explain to them in a context you aren’t getting elsewhere,” Ritholtz said, noting that portfolios are made for distant targets. If you are invested for twenty years down the road, you shouldn’t necessarily feel like the sky is falling when the market tanks.

According to Sherman, “This is a country of innovation. There’s been dire times, but we’ve gotten through those every time before.”

Ritholtz believes that being “average” in performance over a long time will slowly move a portfolio into a top tier of performance.

“You don’t want to spend a lot of time, energy and resources looking at a one-off position,” Ritholtz advised, noting that even if past performance isn’t an indicator of future performance, simply having a track record is powerful.

Discussing restaurants as an example of how people might look at a business, Ritholtz noted that it is challenging to make successful and that most restaurants fail. But we tend only to see the ones that have survived, which gives us a misconception about how easy that business might be. “I think the whole world is survivorship bias, and it gives us a skewed perspective.”

“We don’t sell private equity but allow people to buy it,” Ritholtz said, but he sees a lot of asterisks with private equity. “The only decent argument I’ve heard is when everything gets dicey, and people start lowering their ask price for everything they can do, we have an opportunity.”

With the public markets down, some valuations are returning there. “If you want to take the risk, you should take risk in the bond market,” Sherman said.

“I think eventually inflation subsides,” Ritholtz said, noting that its primary drivers are the pandemic and the supply chain collapse.