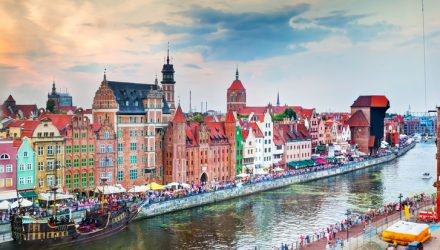 Risks May Lie Ahead for Huge Poland ETF Rally

Up an average of about 45%, the VanEck Vectors Poland ETF (NYSEArca: PLND) and the iShares MSCI Poland Capped ETF (NYSEArca: EPOL) are two of this year’s best-performing single-country emerging markets exchange traded funds, but some analysts see some risks facing the Eastern European economy as it tussles with the European Union (EU).

Poland’s recent rift with the EU stems from the country’s treatment of the judicial branch and concerns by outsiders that democracy there could be threatened as a result.

“Tensions mounted last week when the European Commission escalated the ‘rule of law’ procedure against Poland, started in January 2016, to its third and last stage,” said Fitch Ratings in a recent note. “The Commission said recently announced bills would ‘structurally undermine the independence of the judiciary’ and asked the Polish authorities to address its concerns within a month. It added that if Poland takes measures to dismiss or force the retirement of Supreme Court judges, the Commission could trigger an ‘Article VII’ procedure.

PLND is nearly eight years old and holds 28 stocks. That ETF follows the MVIS Poland Index. Like its rival, PLND is heavily allocated to financial services and energy stocks with those two sectors combining for almost two-thirds of the ETF’s weight. However, PLND offers more leverage to the Polish consumer with consumer discretionary and staples combining for almost 16% of the ETF’s roster.