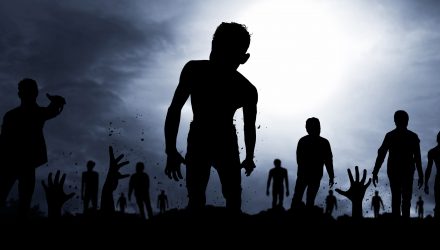 A recent report by the Bank for International Settlements showed that the rise of zombie firms, those identified as ” firms that are unable to cover debt servicing costs from current profits over an extended period,” have risen since the 1980s. The report, by Ryan Banerjee and Boris Hofmann, cite the effects of a low-interest rate environment as the apparent cause for this zombie firm apocalypse.

“Our analysis suggests that this increase is linked to reduced financial pressure, which in turn seems to reflect in part the effects of lower interest rates,” the report noted. “We further find that zombies weigh on economic performance because they are less productive and because their presence lowers investment in and employment at more productive firms.”

The report comes as the general consensus, based on the latest Fedspeak, is that the central bank will continue forward with an upward, but steady rate hike this week. Based on the latest round of economic data, the economy has been full steam ahead highlighted by a strong stock market that has seen the major indexes like the S&P 500 reach record levels.

“The message from this meeting will be continued gradual hikes, with a watchful eye toward risks — to both the upside and downside,” Morgan Stanley economists said in a note.

Despite this, the interest rates have been low relatively low since the 80s, spawning a rise in these zombie firms characterized by their lack of experience in the industry in addition to their low profitability. The report goes on to cite that this rise in zombie firms tends to crowd out investment as well as employment in more productive firms.