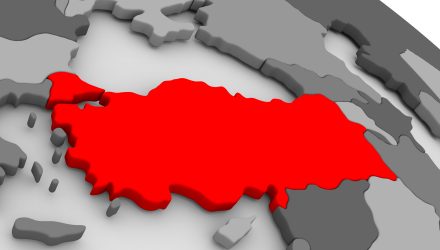 The Turkey country-specific ETF climbed Thursday after the Central Bank of the Republic of Turkey aggressively hiked interest rates by 6.25 percentage points in a bid to clamp down on runaway inflation and prop up its lira currency.

Defying President Recep Tayyip Erdogan’s demand to keep rates low, the central bank raised its main interest rate to 24% from 17.75% due to concerns over price stability and argued it would tightly monitor monetary policy until the inflation outlook improves significantly, the Wall Street Journal reports.

The central bank’s actions eased investor concerns over the institute’s independence from Erdogan, who has championed a low rate policy, which has heavily weighed on the lira currency this year.

“This was much bigger than expected. It sends a signal to the market and it’s a good signal,” Kevin Daly, portfolio manager for emerging-market debt at Aberdeen Standard Investments, told the WSJ. “It gives you some confidence in the lira that you might be able to buy this thing again.”