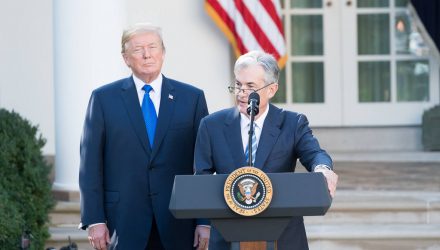 Trump Takes Another Jab at Fed Chair for Raising Rates

U.S. President Donald Trump once again took jabs at Federal Reserve Chairman Jerome Powell for raising interest rates, telling political donors at a fundraiser in the Hamptons that he hopes the Fed Chair eases up on monetary policy.

Since January 2017 when President Trump took office, the Federal Reserve has hiked interest rates fives times versus just once during former president Barack Obama’s tenure. With major stock market indexes closing in on record highs, the prevailing sentiment is that two more interest rate hikes will occur prior to the end of 2018.

“He (Trump) was questioning why it was happening,” one person at the event said, according to a Dow Jones report. “He made a reference to things going so well, so why bother” raising rates.

In an interview with CNBC, U.S. President Donald Trump unsurprisingly made his discontent known publicly, saying he’s “not happy” about the Federal Reserve’s latest monetary policy moves to raise interest rates. In typical Trump fashion, the president took to social media to say that the U.S. “should not be penalized because we are doing so well.”

Treasury yields fell across the board as the benchmark 10-year yield fell to 2.833 and the 30-year dipped below 3% to 2.992, while the 5-year yield dropped to 2.711 and the 2-year settled at 2.596 as of 12:50 p.m. ET. The drop in yields come ahead of a gathering of global central bankers and economic policy experts at the Kansas City Federal Reserve’s annual symposium in Jackson Hole, Wyoming scheduled for later this week–August 23 – 25.

The symposium is of particular importance as central bankers have used Jackson Hole as a soundboard to deliver important news regarding monetary policy. In addition, Fed Chair Jerome Powell is set to deliver a speech on “monetary policy in a changing economy” on Friday at 10 a.m. ET.