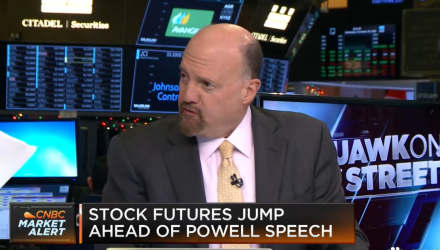 U.S. President Donald Trump’s recent interview with the Washington Post gave market maven and CNBC “Mad Money” host Jim Cramer enough insight to identify Trump’s tell in a high stakes poker game of economic policy in which he saw the president rattled by the latest rumblings in the economy.

With the recent news of automaker General Motors announcing plans to slash 14,000 jobs and shutter five facilities in North America, Cramer noticed the president’s uneasiness when discussing the topic.

“I think he’s beginning to recognize that there are cracks in the strength of the economy that really came from his tax cuts,” Cramer added. “I think he’s starting to realize that ‘Holy cow, this could go away.'”

As has been the norm with every rate hike, Trump also took the time to lambaste the Federal Reserve for their rate-hiking policy, but even they might be starting to exhibit signs of dovishness.

The general consensus in the capital markets is that a rate hike is slated for December, but the decision will also hinge on data, judgement and a little extra, according to Federal Reserve Vice Chairman Richard Clarida.

Not long ago, it seemed that a fourth and final rate hike to cap off 2018 was a sure thing, but the sell-offs in October and its spillover into November may have caused the Federal Reserve to take on a more dovish tone heading into December. Still, the CME Group’s FedWatch Tool, an algorithm that calculates the probability of a rate hike in a given month, is showing a 79.2% chance the Federal Reserve will institute a fourth rate hike for December.

Comments from various other Fed members might be signaling otherwise, including those by Fed Chair Jerome Powell. Powell exhibited signs of cautiousness as he discussed the economy at a symposium with Dallas Fed President Robert S. Kaplan earlier this month.