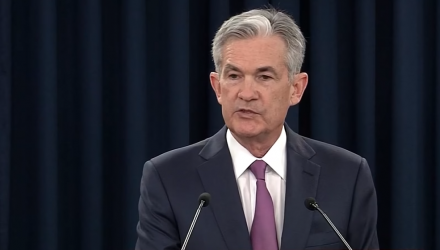 As widely expected by the capital markets, the Federal Reserve raised interest rates by 25 basis points on Wednesday to make it a fourth and final rate hike for 2018.

Ahead of the rate decision, the CME Group’s FedWatch Tool was calculating a 73.2 percent probably of an interest rate hike of 25 basis points to a range of 2.25 to 2.50. The central bank didn’t throw the markets any curveballs after dovish tones ahead of the decision may have sent a message that a rate pause was also likely.

However, the Fed proceeded with their rate-hiking policy despite the latest rumblings in the stock markets. The Dow Jones Industrial Average has lost over 3 percent year-to-date, while the S&P 500 has lost 3.79 percent.

Analysts have been citing rising interest rates as one of the causes for the latest declines in U.S. equities. Of course, the rate hike comes much to U.S. President Donald Trump’s chagrin.

Just two days before Wednesday’s announcement, President Trump was already lambasting the Federal Reserve. As has been the norm whenever denigrating the central bank, President Trump took to Twitter to sound off on the economy.

This time, the president cited a strong dollar and inflation as reasons to curb further rate hikes.

Rate hikes have been anathema to President Trump, and with the stock markets in the red as of late even after a historic bull run that saw companies like Apple and Amazon cross $1 trillion in market capitalization, the president has been quick to deride the Fed whenever the markets react negatively.