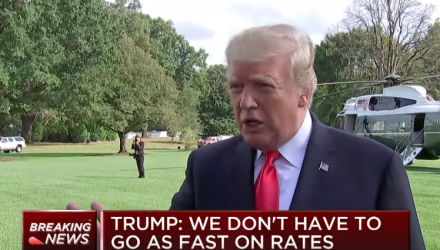 As Markets Decline, Trump Turns Up Volume on Lower Rates

As the major indexes ran roughshod over investors with more declines on Tuesday, it was U.S. President Donald Trump resorting to familiar behavior as he turned up the volume on his request for lower interest rates.

With a rate announcement looming in December, the president cued up a familiar monologue on his thoughts about rates and the current state of the capital markets in which he aptly pointed out the declines in the tech-heavy Nasdaq Composite, which shed 1.7% on Tuesday.

“I’d like to see the Fed with a lower interest rate. I think the rate’s too high. I think we have much more of a Fed problem than we have a problem with anyone else,” Trump told reporters outside the White House. “I think your tech stocks have some problems.”