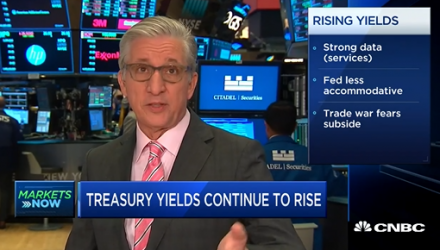 The extended bull run in U.S. equities is now flowing over into yields for the U.S. government debt space as the benchmark 10-year Treasury note yield reached a seven-year high, reaching past the 3.2% mark before settling to its current level of 3.189 as of 12:30 p.m. ET.

“The bond market has thrown in the towel, no longer intimating that yields move up or down based on whatever the inflation outlook is at a given time,” said Kevin Giddis, head of fixed income capital markets at Raymond James.

“The likely reason for this is that the U.S. economy is strong and isn’t really showing many signs of weakness, and as a bonus, prices have remained low and more importantly, unexplained,” Giddis added.

Yields moved higher on positive jobs data as the Labor Department revealed today that unemployment claims last week fell to a 49-year low, pointing to sustained strength in the labor market. Claims for unemployment benefits fell to 207,000, besting the forecasted 213,000 by a Reuters poll of economists.

In addition, today’s data pairs yesterday’s positive news that private payrolls grew stronger than expected in September with 230,000 positions added. The private payrolls total easily bested the 168,000 jobs added in August–more than the 185,000 expected by a survey of economists and the highest number of payrolls added since the 241,000 added in February.