You are at:Home»Investing»Retirement Plans May Be ETFs’ Next Frontier 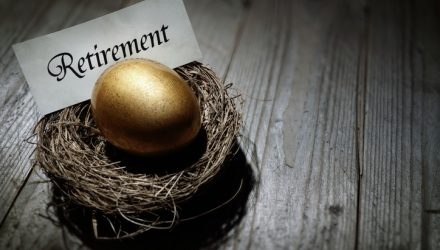 Retirement Plans May Be ETFs’ Next Frontier

The U.S. exchange traded fund universe has already topped $3 trillion in assets under management as a number of investors adopted the cheap, efficient and easy-to-use investment vehicle, but ETFs have yet to make a big headway into retirement plans.

According to the Investment Company Institute, two-thirds of the $5 trillion in assets in company-sponsored 401(k) plans are held in mutual funds while only a mere fraction of the pool left over are held in ETFs, reports Beth Pinsker for Reuters.

A number of retail investors, financial advisors and institutional-level investors have tapped into ETFs for their tax efficiency, intraday trading and dirt-low fees. There are now 2,045 U.S.-listed exchange traded products with $3.064 trillion in assets under management, according to XTF data.

However, in a tax-advantaged 401(k) plan where investors buy-and-sit on their investments until their golden years, many of the advantages found in ETFs are less appealing. Furthermore, many retirement investors are not aware of the subtle differences between ETFs and mutual funds.

Steve Anderson, president of Schwab Retirement Plan Services, also pointed out research showing that investors do better in managed accounts, instead of picking and choosing their own funds. These managed accounts, especially those that are crafted for retirement, are mostly dominated by mutual funds.

Another impediment to the adoption of ETFs in retirement accounts has to do with the structure of the funds. While ETFs may trade throughout the day like a stock, mutual funds are priced at the end of the day. If traditional retirement plans were to adopt ETFs, they would have to change the record-keeping system.