You are at:Home»Equity ETFs»Retail ETF Could be a September Winner 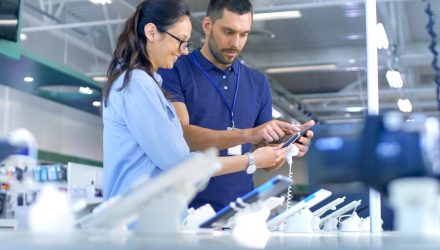 Retail ETF Could be a September Winner

The SPDR S&P Retail ETF (NYSEArca: XRT), the largest retail-related exchange traded fund, jumped nearly 4.8% in August, extending its third-quarter gain to over 10%. Some signs point to more upside ahead for retail stocks in September.

The ongoing strength in the U.S. economy has fueled the rising consumer sentiment. The strength in the retail sector this year is a stark contrast in previous years when investors grew concerned over the future outlook of traditional brick-and-mortar stores in face of a rising competition from e-commerce or internet retailers.

“Specifically, retail has been one of the best sectors to own in September, according to data from Schaeffer’s Senior Quantitative Analyst Rocky White. Over the last 10 years, XRT has averaged a monthly gain of 1.53% — the most of any ETF we track. Another move of this magnitude would put the shares at $52.58, based on their current perch,” reports Schaeffer’s Investment Research.

Other retail ETFs include the Invesco Dynamic Retail ETF (NYSEArca: PMR). PMR seeks to track the investment results (of the Dynamic Retail IntellidexSM Index, which is composed of common stocks of 30 U.S. retailers. These companies are engaged principally in operating general merchandise stores such as department stores, discount stores, warehouse clubs and superstores; specialty stores, including apparel, electronics, accessories and footwear stores; and home improvement and home furnishings stores.

Retail ETFs such as PMR and XRT are getting a lift from robust back-to-school spending.