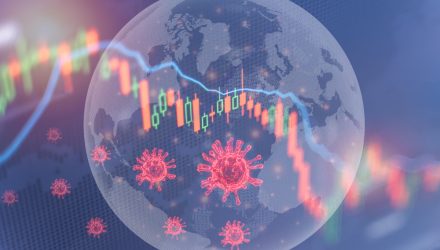 U.S. markets and stock ETFs slumped Wednesday after President Trump issued a new warning on the coronavirus pandemic, renewing concerns over the potential negative effects on the economy.

Trump warned there could be as many as 240,000 deaths across the U.S. in the days ahead, the Wall Street Journal reports. The U.S. now has more confirmed cases than any other country in the world, with more than 189,000 infected.

“We’re slowly peering through the fog and trying to see how bad things will become, but essentially we are flying blind,” Peter Dixon, a senior economist at Commerzbank, told the WSJ. “It’s very clear this is going to be the biggest sudden stop in measured history: The economy is just going to hit the buffers.”

Goldman Sachs now estimates the real U.S. GDP to plunge 34% in the second quarter on an annualized basis, Reuters reports.

“People are concerned with the economic reality of both the depth as well as the duration of what this episode will be for the global economy,” Eric Freedman, chief investment officer at U.S. Bank Wealth Management, told Reuters. “There is room for further downside and we are still advocating for caution.”

Nevertheless, some see opportunity in the low markets after the major selling. Philip Blancato, CEO of Ladenburg Thalmann Asset Management, argued that the market entered a new phase after the initial shock wore off. Stocks are cheap enough now to attract bargain-hunting investors that are hoping the market will bottom out once measures to battle the virus show signs of effectiveness.

“Stocks are now inexpensive,” Blancato told the WSJ. “If they’re cheap, that creates a floor in the market for companies with good fundamentals.”