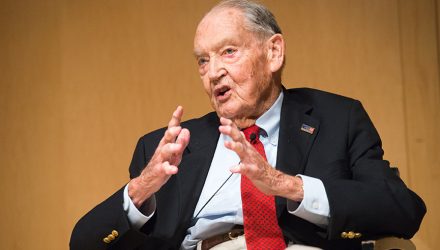 Today, Vanguard Group has $5.1 trillion in assets under management. It currently has 80 ETFs with a staggering $889.54 billion AUM, trailing only BlackRock that has $1.402 trillion in ETF AUM.

He was the author of 13 investing books – his most recent was in 2018 called “Stay the Course: The Story of Vanguard and the Index Revolution.”

His primary philosophy was “common sense” investing – two of his books used the phrase in their titles.

His genuine nature was never more on show than when he told an audience at Philadelphia’s Jefferson Hospital on the 21st anniversary of his heart transplant there.

“It was never my intent to build a colossus. I’m a small-company kind of guy,” he said. “Turns out, when you do what’s right for investors, money pours in.”