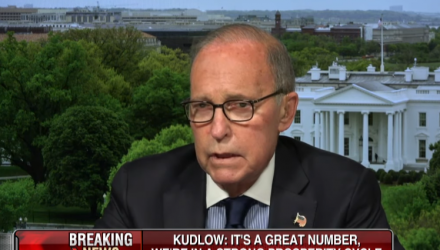 December 2018 was the last time the Federal Reserve implemented a rate hike, and according to White House economic adviser Larry Kudlow, the central bank should “take back the interest rate hike” with a rate cut.

Kudlow’s comments come after the Labor Department recently showed that the U.S. economy added 224,000 jobs last month, which easily bested a Dow Jones estimate of 165,000. This prompted the director of the National Economic Council to show effusive praise for the health of the U.S economy.

“We are still in a very strong prosperity cycle. … We have very good pro-growth policies, low taxes, deregulation, opening energy, trade reform. I think the incentives of our supply-side policies are working,” Kudlow said Friday on Bloomberg Television after the release of the June jobs report.

The capital markets will keep their eyes and ears fixated on Federal Reserve Chair Jerome Powell this week as he’s scheduled to answer questions on the economy as he testifies before the House Financial Services Committee Wednesday and at the Senate Banking Committee Thursday. What he says or doesn’t say could put U.S. equities at a position of strength or weakness versus international equities.

Powell will certainly field a question or two regarding whether a rate cut could be ahead. A data-dependent Fed could use the latest June jobs report as a reason not to implement a cut.

The central bank has been showing its more dovish side so far this year, which pivots from 2018’s rate-hiking bonanza with possible rate cuts to come before the end of 2019. Additionally, fixed income investors are facing other challenges like inverted yield curves and signs of slowing global growth, which means that getting strategic is a must in the bond market.

The Fed didn’t give capital markets the rate cut they might have been expecting last month, but the major indexes responded positively because they left the door open for reductions in the federal funds rate by year’s end. Powell said that the central bank would adjust interest rate policy as necessary or whatever the economy dictates is best through 2019.