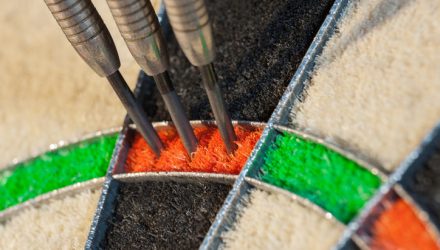 The diverging fortune between the small-cap and large-cap segment is a cause for concern for some investors. Small-cap stocks, which focus more of on the domestic economy, typically strengthen ahead of a wider market rally and fall more quickly ahead of a broader pullback.

IWM’s larger weight to financials, a sector that has been drubbed by declining interest rates, is plaguing the small-cap fund.

IWM allocates over 22% of its weight to financial services stocks, which are vulnerable to declining net interest margins at the hands of lower interest rates. Conversely, the large-cap IWB has a weight of less than 13% to that sector.

“It’s no secret technology has been strongly outperforming the financial sector as a flattening yield curve and unprecedented declines in interest rates squeeze bank profits,” said Young. “The small-cap benchmark sports for a hefty 27% financial industry weight vs. only 21% for its large-cap counterpart. What’s more, large caps also have greater exposure to technology performance leadership with a 22% weight versus only 13% for the Russell 2000 Index.”

For investors looking for continued upside in large-cap equities over small caps, the Direxion Russell Large Over Small-Cap ETF (NYSEArca: RWLS) offers them the ability to benefit not only from large-cap equities potentially performing well but from their outperformance compared to their small-cap brethren.

Related: Is It Time to Reconsider Small-Cap ETFs?

“The financial sector has had a very strong correlation with the direction of US treasury yields for several years and has begun to perk up as rates have stabilized,” said Young. “As for technology, the sector’s valuation premium is now well above its historical average reflecting structural growth tailwinds that are now widely appreciated. All this means that it may be time to re-evaluate small-cap allocations.”

Conversely, if investors believe that small-cap equities will outperform large-cap equities, the Direxion Russell Small Over Large-Cap ETF (NYSEArca: RWSL) provides a means to not only see small-cap stocks perform well, but a way to capitalize on their outperformance versus their large-cap brethren.