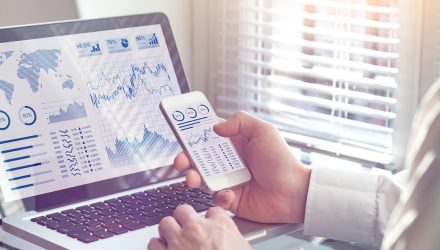 Technical levels include recent averages and other notable milestones that are closely watched by traders to gauge short- and medium-term moves. Stock benchmarks that slip below these critical levels typically trigger selling among market technicians, whom follow trend lines to trace an asset’s performance.

On the other hand, when indices stay above these levels or move past them after dips, these bullish trends may be a catalyst for further buying.

The SPDR S&P 500 ETF (NYSEArca: SPY), which follows the widely observed S&P 500, recently broke below its short-term trend at the 50-day simple moving average for the first time since mid-January. Meanwhile, the SPDR Dow Jones Industrial Average ETF (NYSEArca: DIA) broke below its 50-day average and was testing its long-term trend line at the 200-day simple moving average.

After stocks breached above the key averages and pushed toward record highs in the starting months of the year, some analysts are worried that a reversal will fuel a pullback reminiscent of a plunge that nearly ended the S&P 500’s decade-old bull run in December.

The swings in the trends have corresponded with changing bets on the trade outlook between the U.S. and China. Beijing recently revealed plans to increase levies on $60 billion in U.S. imports after President Donald Trump said he proceed with increasing tariffs on Chinese goods last week.

“It is possible we will still see trade volatility and trade tensions all the way up until the election, because it is a strong political position,” David Kelly, chief global strategist at J.P. Morgan Asset Management, told the WSJ.