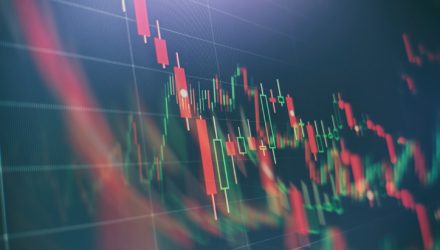 Monday oil markets went nuts. Tuesday the overnight funding markets broke down and the Fed took a few tries to get their (now rusty) open market operations up and running to resolve the liquidity crunch for the first time since the financial crisis — TBD if the week’s liquidity crunch was “idiosyncratic” as many pundits claim. FedEx (FDX) results gave everyone a bit more to worry about with respect to the global economy as if we needed that. Wednesday the Fed both met expectations and simultaneously confused the hell out of markets. Friday China took their toys and went home rather than head to a farm in Montana for more trade talks — what a surprise! I refer you to the chart on trade at the open of my last Context & Perspective.

Turmoil in the Middle East (Again)

The biggest market move was ignited when the (claimed) Yemeni Houthi rebels (aka Iran?) attacked the Saudi Aramco Abqaiq oil processing facility. That attack on what is the largest such facility in the world led to Brent crude oil prices rising as much as 19.5%, a record intraday spike. US West Texas Intermediate (WTI) futures rose as much as 15.5%, the biggest jump since December 2008. The attack took an estimated 5% of global oil production (around 5.7 million barrels per day) offline, more than the Iraq invasion of Kuwait in August 1990, which was a loss of 4 million barrels a day and the hit to Iranian production in 1979 during the Islamic revolution. The Saudis are claiming it was no big deal and all will be resolved in a matter of weeks.

Currently, the US and Saudi Arabia are claiming that there is conclusive proof that Iran was actually behind the attack. The US has been following a policy of maximum pressure on Iran and in response, Iran has been following a policy of maximum chaos from attacks in Strait of Hormuz to (potentially) this latest attack on a vital input to the global economy. With all the geopolitical stability (sarcasm), the world really needed this jolt of additional risk.

We will never really know just how severe the strike was as that would be a clear security risk for Saudi Arabia — why show those who attacked what they got right and what they missed so they can improve on another round? Only time will tell if they are able to get production up as quickly as has been promised, with most back online by October. I did mention last time that volatility was seriously underpriced!

I’ve been warning for quite some time that we would likely see significant liquidity strains in the coming months as the Treasury issues an unprecedented volume of bonds, the baby boomers take their forced seasonal minimum distributions and the impact of higher bank reserve requirements is more acutely felt thanks to the Fed’s tapering. Last week we saw what may be the first hints of problems to come as with the price of oil spiking higher, the demand for US dollars spiked as well. Starting last Tuesday, the Federal Reserve had to provide liquidity four consecutive days in a row, pumping around $200 billion into the US financial system, something we haven’t seen since just prior to the 2008 financial crisis.

There is no clear consensus on what is causing this and there wasn’t back in 2008 either. Many are claiming this is an isolated event due to a combination of unique circumstances from the strike on Saudi Arabia and tax filings this month. If you’d like more details, I highly recommend this read. Only time will tell if this truly was idiosyncratic or if we are seeing warning signs of liquidity problems — I’ll be watching this one closely. Last Friday the Fed announced that it would extend overnight repo operations of “at least $75 billion” each day until mid-October — that doesn’t read idiosyncratic to me.

Looking at longer-dated bonds using the Merrill Lynch 10+ Year US Treasury Index as a proxy, we see that August enjoyed the best monthly gains since December 2008. As equities were taking it on the chin, long bonds were getting a lot of love. But then, in the first ten trading days of September, long-term Treasuries lost 6.5% — the worst ten-day start to a month going all the way back to at least 1987. I say at least 1987, because that’s when daily data begins, so we cannot go back farther. In a period of just six weeks, longer-dated Treasuries saw their best monthly gain in almost eleven years followed by the worst start to a month since daily data began– at least thirty years! These are not normal bull market moves.

As I’ve mentioned in prior issues, the Treasury has been issuing massive amounts of debt. When the federal government hit the debt ceiling, its deficit spending was funded by the Treasury’s general fund account – it’s a piggy bank. Now that the debt ceiling issue has been punted, the Treasury is issuing bonds to both refills its piggy bank and fund the government’s ever-growing fiscal deficit. As those bonds are issued, they are financed in the short-term by the repo markets.

The most recent Bank of America Merrill Lynch Fund Manager Survey gives some color to the dramatic moves in bonds. The survey found that 38% of respondents expect a recession within the next year, up from 34% in August. The biggest tail risk concern for the group (40%) was the trade war with China. Bond allocation for the group dropped to a net 36% underweight after having August’s allocation reach the highest since September 2011. Overall long US Treasury remains the most crowded area for the fourth consecutive month.

Last week the Federal Reserve cut the funds rate by (as expected) 25 basis points to a 1.75-2.00% range. What wasn’t expected was the lack of agreement amongst members with two dissents, Esther George and Eric Rosengren preferring no cut. And then there was Jim Bullard preferring a 50-basis point cut. Five FOMC members want to raise rates again before the end of the year (really!?) with another five wanting to go on hold and seven want to cut one more time. No one is looking for more than one more cut before 2020. In response, the yield curve flattened and President Trump took to Twitter to express his disapproval.

Equity Bumping Against the Ceiling

We are now seeing equity markets both in the US and Europe bumping up against some major overhead resistance.

That said, overall breadth looks decent as all eleven S&P 500 sectors have more than 55% of their component companies above their 50-day moving average. The past week four out of five days the S&P 500 Advance/Decline line has been negative – so breadth has been weakening. We’ve seen strength in the last hour of trading, which is typically a bullish sign as investors are willing to take on overnight risk despite the potential headline or tweet risk. On the other hand, the defensive Utility and Real Estate sectors both have 100% over their 50-day while the cyclical Energy, Industrials and Financial sectors, which had previously been headwinds for the major indices are now more supportive with more than 80% of their components trading above their 50-day. When Utilities are consistently outperforming, do you really call that a bull market?

Taking a step back to look at the bigger picture of equities and bonds, I see a rather troubling picture, shown below (click to enlarge). Looking at the long-term trendlines for the S&P 500 on a weekly basis versus the spread between the US 10-year Treasury yield and the US 3-month yield, major market turning points tend to happen when that spread is negative (shaded in light grey in the S&P 500 weekly). Before anyone gets apoplectic over this one, no person nor any chart for that matter ought to be relied upon to divine the future. We can only deal in probabilities, so we look at a wide range of data points to see if there is a consistent story being told. 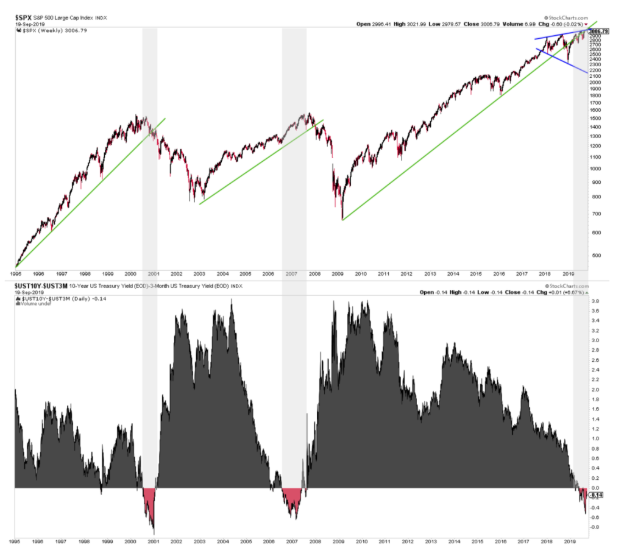 It is also interesting to see that this past week General Motors (GM) suffered its first strike since 2008. The car manufacturer is not alone. Strikes of 1,000 or more workers are expected to affect more than half a million workers this year, the most since 1986 and an increase over last year’s multi-decade high. This coming at a time when earnings growth for many companies has become more and more of a challenge.

This past week FedEx (FDX) reported its second-biggest earnings decline since 2001 after missing its EPS estimates and lowering its guidance. From a macro perspective, the shipping company’s growth has historically closely tracked US GDP – another concerning data point. The company’s quarterly revenues were down slightly year-over-year for the first time since its June 2009 report. The company lowered its full-year 2020 EPS estimates from $14.62 to between $11 and $13, citing the US-China trade war.

While the economic data for the US came in stronger last week, with the one exception for the Empire Manufacturing report, overall the economy is on a slower (slowing) trajectory, highly dependent on consumer spending fueled by falling savings rates. A recent Gallup poll found that more American’s think the economy is getting worse than better. The US-China trade war, coupled with rising geopolitical tensions and uncertainty (Brexit), is hampering growth around the world as execs from the multinationals and many small business look to hunker down until the dust clears. Volatility remains under-priced and the safety plays more attractive for the time being.