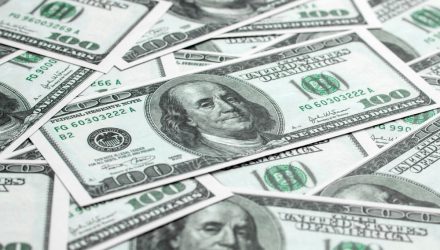 U.S. Dollar ETFs Slip on Bets the Fed Will to Cut Rates

The U.S. dollar and related ETFs pulled back Tuesday on rising bets that the Federal Reserve could intervene and cut interest rates to head off any potential economic weakness stemming from the spreading coronavirus.

On Tuesday, the Invesco DB US Dollar Bullish (NYSEArca: UUP) dipped 0.3%,and the WisdomTree Bloomberg U.S. Dollar Bullish Fund (NYSEArca: USDU) fell 0.2%. Meanwhile, the Dollar Index (DXY), which tracks the greenback against a basket of its peers, slipped to 98.96 after a high of 99.86 last week.

The greenback previously hit its highest level in three years last week as the virus outbreak sent investors to safe-haven U.S. assets. However, money managers have changed their tune, betting on the Fed to be more interested in cutting rates in case of an economic downturn.

Lee Hardman, currency analyst at MUFG, argued that there are “some downside risk for the U.S. dollar,” given the Fed’s potential dovish shift in policy, Reuters reports. Market expectations for further easing continued to build, with money markets pricing in a 25- basis-point cut for the meeting in June.

According to CME Group’s FedWatch tool, options show investors are betting on a 45.9% chance that the Fed will cut rates to between 1% and 1.25% from the current 1.5% to 1.75% range in June. Traders also revealed a 5.0% chance that rates will be at current levels in December, or down from 28.6% a month ago.

“The USD lost upside momentum on Monday. Why? The USD has already appreciated dramatically in 2020 and some positioning/valuations look more stretched,” Alan Ruskin, chief international strategist at Deutsche Bank, told Reuters. “Signs of the USD being penalized for having a central bank with some capacity to cut rates raises the question of whether rate spreads are likely to become a key driver any time soon.”