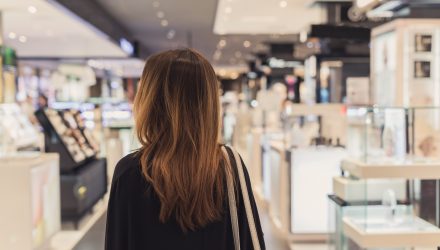 The silver lining is that the latest closures are less than the 100 stores analysts were predicting would close as online retail giants like Amazon continue to snatch up market share. Nonetheless, J.C. Penney management are predicting more closures to come as the underlying trend to increased online retail continues.

“I think as we go forward — as we mentioned, we’re closing 18 [department stores]this year,” Treasurer Trent Kruse told analysts. “I think it’s safe to assume that as you roll into 2020 and future years, it’s likely to see some continuation of that effort. [It’s] hard to say now, but I think that’s a fair read.”

Per research firm Mordor Intelligence, the “internet retailing is the modern way of shopping. With growing penetration of smartphones and mobile devices and the internet services, e-commerce has emerged as a major shopping platform in the world.”

A Strong Contributor to GDP

Based on the CNBC/Moody’s Analytics Rapid Update, economists responding to a survey saw growth at a median 2.4 percent pace, which is down 0.7 percentage points. The Commerce Department reported that retail sales dropped to its lowest level in nine years, which evidenced a drop in economic activity near the end of 2018 as markets were getting roiled by volatility.

“The most plausible economic explanation is that long-dormant wealth effects came back with a vengeance, and consumers slashed their holiday purchases when they saw their 401(k)’s going down the drain,” JP Morgan economists wrote. “At any rate, retailers subsequently added an above-trend 21,000 jobs in January (and private employers overall added 296,000 jobs), so it’s hard to see how that lines up with the December retail sales being the leading edge of more widespread weakness.”