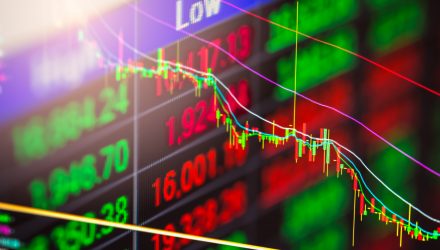 The Possibility of Rate Cuts Could Put Defensives, Cyclicals in Play

As the capital markets are bracing themselves for interest rate cuts happening throughout the year, investors can vacillate on whether they should pour funds into cyclical or defensive sectors. With Direxion Investments’ Relative Weight ETFs, investors can play both sides of the coin as a data-fueled central bank decides on interest rate policy.

“Broad equity index performance after the start of Fed rate cuts depends on whether the economic slowdown was a soft patch or a more severe economic downturn,” wrote Maneesh Deshpande, head of U.S. equity strategy at Barclays, in a note last week.

By looking at past performance, there seems to be drop in equities followed by strength.

“The previous two times the Fed cut rates for the first time in 2001 and 2007, we saw stocks eventually get cut in half,” Ryan Detrick, senior market strategist at LPL Financial, said in a post. “But the reality is if you go back further in time, you can also see explosive rallies after that first cut.”

As far as how many rate cuts the markets are expecting will depend on who you ask. Certain analysts foresee less cuts while others are seeing multiple cuts.

“I think the Fed wants to stay on hold, maybe even cut rates once, but I don’t think the Fed wants to go anywhere near what the market is pricing in right now,” said David Lafferty, chief market strategist at Natixis Investment Managers. “Two or three cuts, that’s a Fed in full retreat. That is the Fed telling you a recession is coming. If the Fed can stay on hold or even give the market a taste of what it wants, without going into full retreat, that would be supportive for stocks.”

Getting Defensive or Cyclical