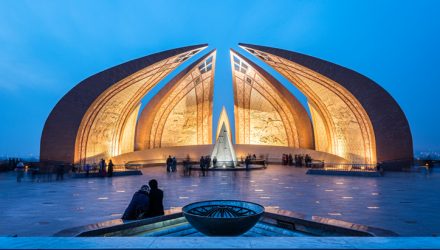 Pakistan country-specific ETF was among the hardest hit Wednesday after Islamabad downgraded diplomatic relations and suspended bilateral trade with its neighbor, India, after New Delhi ended seven decades of autonomy for the disputed Kashmir region.

Prime Minister Imran Khan’s government announced it will take the “unilateral and illegal actions” by India to the United Nations Security Council and enact a series of measures in response, Bloomberg reports.

Some observers, though, were quick to point out that Pakistan’s actions would have little effect commercially since bilateral trade between the two countries amounted to about about $2.5 billion in 2018, or 3% of Pakistan’s total trade and 0.3% for India.

“Pakistan’s move is wholly expected,” Michael Kugelman, deputy director of the Asia Program at the Wilson Center, told Bloomberg. “Despite its bluster, Islamabad has limited true retaliatory options. There’s no way it can get India’s decision to be reversed, and it’s not about to send troops into Kashmir, and so naturally it will take the few risk-free punitive steps at its disposal.”

The escalating tension is a serious affair politically and strategically. Prime Minister Narendra Modi’s decision on revoking the Muslim-majority Kashmir’s autonomy fulfilled a campaign trail promise made to his Hindu base.

The state, officially known as Jammu and Kashmir, has long been the main point of contention between the two nuclear powers. Both countries have laid claim to the region, with two of the three wars associated with conflicts over the territory. More recently, an exchange of airstrikes occurred, following a suicide bombing in Kashmir that killed 40 Indian paramilitary troops.

As a result of the diplomatic deterioration between the countries, Pakistan told India to remove its high commissioner from Islamabad and said it would not be sending over its designated commissioner.