You are at:Home»Relative Value Channel»Oil Declines After Trump Tweets That Prices Are Too High 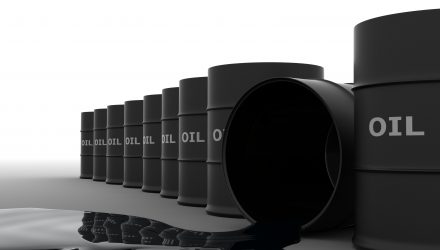 Oil Declines After Trump Tweets That Prices Are Too High

U.S. President Donald Trump’s tweet on high oil prices took aim at the Organization of the Petroleum Exporting Countries (OPEC) and sent crude down as much as 3 percent on Monday. U.S. West Texas Intermediate crude prices were at $57.26 a barrel while Brent crude settled at $67.12 a barrel as of 3:00 p.m. ET.

The drop in prices comes as large oil firms like Exxon, Chevron and Shell posted their biggest profits in 2018 despite global oil prices falling as much as 38 percent.

According to FactSet data, global crude oil averaged about $71 a barrel in 2018–just over 30 percent lower than in 2014, but the five biggest oil companies–Exxon, Chevron, Shell, BP PLC and France’s Total SA combined–are on track to post $84 billion, which is 13 percent higher versus four years ago when oil sold came in at $100 a barrel.

That performance is reflecting in the United States Oil (NYSEArca: USO) ETF, which is up over 17 percent year-to-date.