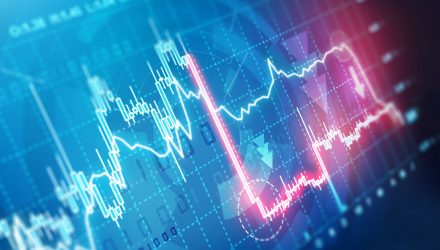 Global investment firm Morgan Stanley downgraded its outlook on global stocks based on fears that slowing economic growth around the globe will offset any moves by the central bank to help curb the slowdown. This could put the Direxion FTSE Russell US Over International ETF (NYSEArca: RWUI) in play for strength in U.S. equities.

Chief cross-asset strategist Andrew Sheets told clients in a note that despite a more accommodating Federal Reserve, investors have yet to fully digest the effects of weaker economic growth ahead.

“Over recent weeks, you’ve heard us discussing why we think investors should fade the optimism from the recent G20,” Sheets wrote in the July 7 note. “Why we think bad data should be feared rather than cheered because it will bring more central bank easing. Why we think the market is too optimistic on 2019 earnings and is underestimating the pressure from inventories, labour costs and trade uncertainty.”

“The time has come to put our money where our mouth is,” he added. “The positives of easier policy will be offset by the negatives of weaker growth.”

The central bank has been showing its more dovish side so far this year, which pivots from 2018’s rate-hiking bonanza, with possible rate cuts to come before the end of 2019. Additionally, fixed income investors are facing other challenges like inverted yield curves and signs of slowing global growth, which means that getting strategic is a must in the bond market.

The Fed didn’t give capital markets the rate cut they might have been expecting last month, but the major indexes responded positively because they left the door open for reductions in the federal funds rate by year’s end. Federal Reserve Chairman Jerome Powell said that the central bank would adjust interest rate policy as necessary or whatever the economy dictates is best through 2019.

For investors looking for continued upside in U.S. equities over international equities, RWUI offers them the ability to benefit not only from domestic U.S. markets potentially performing well, but from their outperformance compared to international markets.

Global economic growth remains a primary concern, however. Earlier this year, the IMF cut its global growth forecast to the lowest level since the financial crisis, citing the impact of tariffs and a weak outlook for most developed markets.

According to the IMF, the world economy will grow at a 3.3% pace, which is 0.2% lower versus the initial forecast in January. Nonetheless, strength in leading markets like the U.S. with its healthy labor market are keeping global growth afloat.