You are at:Home»Relative Value Channel»Investors: Keep ECB Expectations in Check 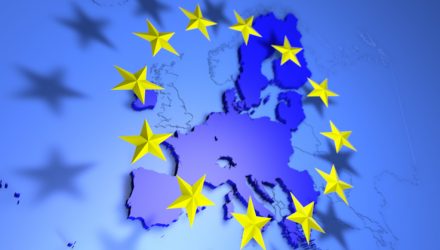 As the markets wait in anticipation for the European Central Bank to make its monetary policy decision on Thursday, Europe ETF investors should keep hopes of a quick turnaround in check.

However, the markets are not so sure the ECB’s move ahead will do much to support an ailing economy this time around. Economists largely expect the ECB to announce a key deposit rate cut of at least 10 basis points from its current level of negative 0.4%, the Wall Street Journal reports. Expectations for an increase in the size of the monthly bond purchase program have also diminished.

“The market is very overexcited” about both the magnitude of the stimulus measures and the likelihood it will bolster economic activity across the Eurozone, Colin Harte, head of research in the multistrategy team at BNP Paribas Asset Management, told the WSJ.

Harte argued that the sluggish Western economies are unlikely to rebound without an aggressive government-spending plan to boost employment, wages and demand for goods and services, even if the economy enjoys a looser monetary policy.

“We doubt how effective monetary policy is, without fiscal expansion,” Harte added.

In recent days, some have grown skeptical of ECB President Mario Draghi’s intentions to hold off on offering specific details about the quantitative-easing program while others speculated that the central bank could could even include bank credit, equities and exchange-traded funds in that plan. Some also hope that the ECB could take steps to make the negative rates environment less painful for banks.

Harte has even begun to pare down positions on European bonds and equities to slightly underweight from overweight on expectations that the markets might be disappointed once the ECB announces its decision.