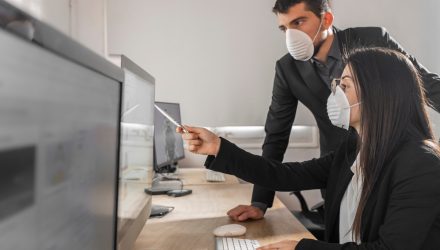 U.S. markets and stock exchange traded funds gained momentum Tuesday as investors hoped the coronavirus pandemic is peaking and the rate of infections could be slowing down.

On Tuesday, the Invesco QQQ Trust (NASDAQ: QQQ) was up 1.6%, SPDR Dow Jones Industrial Average ETF (NYSEArca: DIA) rose 2.7%, and SPDR S&P 500 ETF (NYSEArca: SPY) gained 2.6%. Additionally, the Nasdaq-100 was testing its long-term resistance at the 200-day simple moving average and the S&P 500 was on pace for its biggest two-day gain in almost two weeks, but the major indices remain below 200% from their mid-February highs.

New York Governor Andrew Cuomo remarked that the state’s hospitalization rate has slowed while other hard-hit countries in Europe, including Italy and Spain, have also noted a slowdown in new infections following strict containment measures, the Wall Street Journal reports.

“It’s hard to reject the view that things are improving,” Paul O’Connor, head of multiasset at Janus Henderson, told the WSJ. “Markets have been celebrating this in the last couple of days.”

Nevertheless, these are still preliminary results and authorities have warned of potentially worsening conditions in the coming week. Cuomo also said Tuesday that deaths associated with the coronavirus reached a record Monday. Almost 5,500 people have died from the virus in New York or almost half of all U.S. deaths.

“The rally is sentimental and a little premature because if we lift these lockdown measures too soon and try to resume economic activity, we’re going to get a very severe pandemic rebound,” Indranil Ghosh, chief executive officer of Tiger Hill Capital, told Reuters.

The economic impact of COVID-19 is expected to weigh on the corporation’s bottom line as we head into the earnings season. Analysts now anticipate first-quarter earnings for S&P 500 firms to decline 6.4% compared to a January 1 forecast for a rise of 6.3%.

“There’s still a lot of headwinds that could cause this market to re-test the lows,” Nancy Perez, senior portfolio manager at Boston Private Wealth, told Reuters. “There will be the initial resumption of business on paper, but then the actual actions will have to follow.”