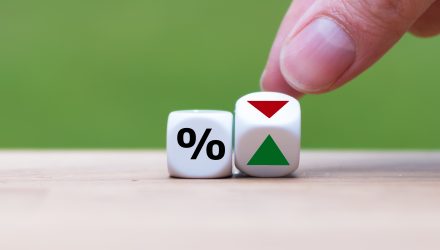 As investors douse the bond markets with more capital as a result of global recession fears, prices have been climbing and yields have been falling in Treasury notes to record-low levels. The move has been causing analysts to ponder whether negative interest rates could be on the horizon, but bond expert DoubleLine CEO Jeffrey Gundlach believes that rates have finally hit a bottom floor.

“It’s not a great idea to bet on low-interest rates,” Gundlach said in an investor webcast on Tuesday.

Per a CNBC report, “The yield on the benchmark 10-year Treasury breached below 1.5% in August, while the 30-year Treasury bond yield fell below 2% for the first time ever as the U.S.-China trade war escalated.”

Last week, in order to stem the tide of falling rates, the central bank conducted a repurchase operation to the tune of $53 million in various debt instruments. It was a move the Fed made for the first time in a decade.

The move came after the buzz in the capital markets that the Fed was losing sight of their benchmark rate. The move came amid last week’s decision to cut rates by another quarter-point.

The repurchase operation spiked the overnight repo rate to as high as 8.5%, which alarmed analysts.

“It’s pretty serious — not an existential financial system crisis, but it’s pretty serious,” said Guy LeBas, chief fixed-income strategist at Janney Montgomery Scott. “The issue that worries me more is when financial rates spike like this, unpredictable events start to come up … random things that tend to precipitate financial crises. Higher financing rates means the marginal borrower gets pushed out of the financial markets. It creates an opportunity for those problems to emerge.”

Gains Made in America

Worries of slowing global growth and inverting yield curves haven’t slowed down the U.S. For investors who are worried that U.S.-China trade wars will feed into more weakness for U.S. equities, they can feel at ease knowing that when it comes to relative value ETFs, the United States is still the place to be.

“While small caps remain a pocket of relative weakness within the U.S. equity markets, it is hard to ignore how dominant U.S. stocks have been relative to international stocks,” Direxion Investments said in their latest Relative Weight Spotlight. “On a year-to-date basis, the U.S. has outperformed by 9.53%. In fact, on almost every trailing monthly basis going back to 2016, the U.S. has outperformed international stocks. While classic valuation metrics may be signaling for a rotation towards international exposures, we continue to believe that the current macroeconomic environment supports for this trend to continue.”

Related: How Much Do The Markets Believe The Fed?

The month of August was a challenging environment for most equities, but compare say emerging markets to U.S. equities, and investors will see that they were better off sticking with the red, white and blue.

For investors who may be sensing continued upside in U.S. equities over international equities, the Direxion FTSE Russell US Over International ETF (NYSEArca: RWUI) offers them the ability to benefit not only from domestic U.S. markets potentially performing well but from their outperformance compared to international markets.