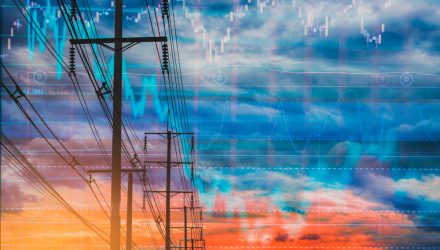 Energy stocks took the brunt of the blow during the market selling, but investors were funneling more money into the sector-related exchange traded fund in a bid to catch the falling knife.

The widely observed Energy Select Sector SPDR Fund (NYSEArca: XLE) was among the most popular ETF plays over the past week, attracting $1.1 billion in net inflows, according to ETFdb data.

While some of that investment interest may be associated with investors borrowing to short the sector, the energy ETF itself is garnering more attention in the wake of the precipitous plunge in crude oil prices and energy stocks.

The Energy Select Sector SPDR Fund declined 34.6% over the past week and plummeted 50.9% year-to-date.

The recent sell-off may have opened up a potential buying opportunity for bargain hunters, especially in the oversold energy sector. The energy sector’s price-to-book ratio is at the lowest level ever while its price-to-sales multiple is at the bottom 6th percentile.

The energy sector retreated this month and was the worst performing S&P 500 sector as crude oil prices declined toward $30 per barrel. West Texas Intermediate crude oil futures were now hovering around $32.0 per barrel on Friday.

In its monthly report on Wednesday, OPEC downwardly revised projections for global oil demand growth this year and raised its outlook for supply, U.S. News reports.

“It’s a problem of an oil price war in the middle of a constricting market when the walls are closing in,” U.S. energy historian Daniel Yergin told Reuters.