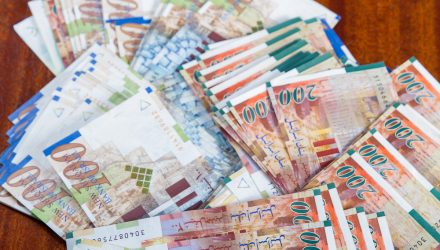 An Israel country-specific exchange traded fund strengthened on heavy action Monday after the Bank of Israel lowered its benchmark interest for the first time in five years.

The Bank of Israel lowered its benchmark interest rate to 0.1% from 0.25%, and its governor hinted that they were considering a move to negative rates if the economy deteriorates much further, Reuters reports. The central bank also expanded its repo transactions and will provide three-year loans to banks to support liquidity in the current credit crunch.

The coronavirus pandemic pummeled Israel’s economy as the country goes into lockdown, and in an attempt to cushion the blow, the central bank already added liquidity to financial markets through government bond purchases and foreign exchange intervention, along with easing banking restrictions.

The interest rate cut on Monday marks its first break from keeping rates steady in the past 10 meetings after a November 2018 interest rate hike.

In Israel, nearly 9,000 have been infected with the coronavirus or COVID-19 respiratory disease, and 51 have died as a result.

As a way to control the outbreak, Israel has enacted stringent restrictions and confined Israelis to their homes, forcing businesses to close and triggering a 25% unemployment rate, with over 1 million filings for jobless benefits so far.

Bank of Israel Governor Amir Yaron warned that by the end of March, 37% of economic output was at a standstill and 27% of consumer spending stopped, with the first quarter GDP expected to contract by 5%.

The rate cut “will lead to an immediate reduction, even if small, in the costs of credit for households and businesses, and will support the recovery of economic activity in the exit from the crisis,” Yaron said. “This is a required step in view of the magnitude of the real adverse impact suffered by the economy, and it complements the other steps upon which we decided.”