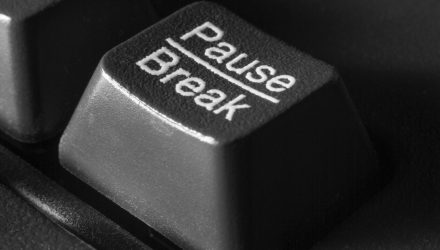 Getting Defensive When the Fed Pauses on Interest Rates

On Wednesday, while the central bank elected to keep interest rates static, the markets dipped into the red with the Dow Jones Industrial Average falling over 160 points. With a U.S.-China trade deal already priced into the markets, investors were looking for another trigger event–a rate cut–except the Federal Reserve passed on that notion and stayed put.

“In light of global economic and financial developments and muted inflation pressures, the Committee will be patient as it determines what future adjustments to the target range for the federal funds rate may be appropriate to support these outcomes,” the Federal Open Market Committee’s policy statement read.

Fed Chairman Jerome Powell reiterated his ongoing message of patience as the wait-and-see approach by the central bank continues to persist.

“The market was pricing in nothing but rate cuts,” said Gennadiy Goldberg, United States rates strategist at TD Securities. “I think he was trying to push back against the idea that the economy is turning lower and the Fed can never generate inflation.”

Getting Defensive with Relative Weight ETFs

Powell tried to convey a positive message for the capital markets, but investors simply weren’t feeling the good vibrations. In addition to the Dow stumbling, the S&P 500 and Nasdaq Composite–with both reaching new highs the past week–fell 0.75 percent and 0.57 percent, respectively.

“It appears that risks have moderated somewhat,” said Powell following the rate announcement. “Our outlook, and my outlook, is a positive one, is a healthy one, for the U.S. economy for the rest of this year.”

“We do think that our policy stance is appropriate right now,” Powell added. “We don’t see a strong case for moving in either direction.”