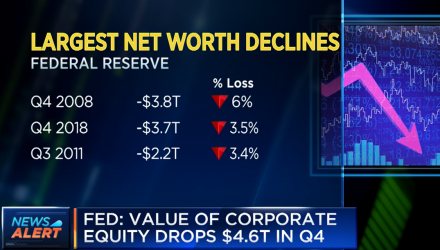 American household net worth fell to its lowest level since the financial crisis during the fourth quarter of 2018 when volatility roiled the capital markets, according to data published by the Federal Reserve.

Net worth dropped to $104.3 trillion to close out 2018, which represents a $3.73 trillion decline–3.4 percent. Despite the decline in household net worth, gross domestic product (GDP) rose 2.6 percent during the fourth quarter, which bested expectations of 2.2 percent by a Dow Jones survey of economists.

In the video below, CNBC’s Steve Liesman reports on the largest household net worth decline since the financial crisis.