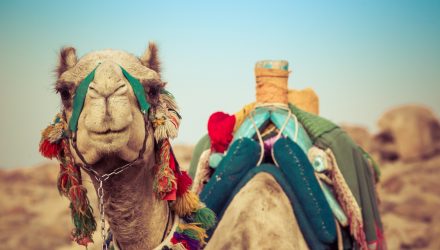 Egypt ETF Is a Stand Out Emerging Market Pick This Year

Egyptian stocks and country-specific ETFs are among the better performers as the emerging markets rebounds, supported by increased expectations that the Egyptian central bank will cut rates to support growth.

The Egyptian pound and falling inflation helped contribute to rising expectations that Egypt’s central bank would cut rates at its upcoming meeting on February 14, which added to optimism among domestic and enticing investors, whom increased their holdings in Egyptian assets, Reuters reports.

“There is no financial reason pushing the market higher, but expectations of interest rate cuts and the central bank governor’s statements helped stocks and the market rally this week,” Ahmed Hesham, vice president of equity and quantitative strategy at Beltone Financial, told Reuters.

EGPT surged 10.3% over the past week alone, while the Egyptian Exchange’s benchmark index gained 4.6%.

Central bank Governor Tarek Amer said last week the Egyptian pound currency would experience greater volatility after the bank ended a policy that guaranteed foreign investors could repatriate dollars when they sold Egyptian securities. Investors will have to deal with the process through the interbank market.

The pound appreciated 2% over the past week to EGP17.68 against the U.S. dollar.

“There is a state of recovery in emerging-market indicators, including Egypt, alongside the monetary policy variables in the country,” Mohammed El Saiid, head of technical analysis at HC Securities & Investment, told Reuters. “All of that helped lift the market.”

Fueling bets of a rate cut ahead, Egypt’s urban inflation dipped in December to 12.0% from 15.7% in November. The central bank already left rates unchanged at its December meeting before the updated inflation numbers came in.

“December inflation figures had a direct impact on what is happening in the market, especially as the figures were unexpected, as did investor expectations of an interest rate cut,” Radwa El-Swaify, head of research at Pharos Securities Brokerage, told Reuters. “There is optimism about the market’s performance. We may see a continuation of the rally until April.”