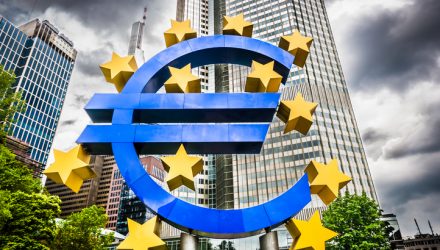 With the European Central Bank President Mario Draghi assuring that the revived quantitative easing program will continue to run smoothly, investors who are interested in European markets should stick to currency-hedged exchange traded funds to mitigate any further foreign exchange risks.

It’s going to “take quite a bit of time” before the problem of the so-called issue limit “will realistically present itself,” Draghi said Thursday after his final policy decision before his term ends. “The European Court of Justice has granted ample discretionary power within the mandate to the ECB.”

The re-started QE program, which was contested in the European Court of Justice, is constrained by rules to ensure the central bank does not step beyond its bounds to finance Eurozone governments. The issue limit is a self-imposed restriction to prevents the ECB acquiring over a third of each government’s debt.

Another constraint, known as the capital key, keeps ECB’s bond purchases roughly in proportion to the size of each member state’s economy.

“We have capital-key rules in the way we purchase bonds and the relevant key is the stock of capital,” ECB President said. “We don’t foresee substantial material deviations in the aggregate in the months and years to come.”

Looking ahead, Draghi told his successor on Thursday to “never give up” on supporting the Eurozone. He will be stepping down and Christine Lagarde will take over on October 31. Draghi’s term was defined by a single goal to boost price growth in an ailing and divided currency bloc.

“This is part of our legacy: never give up!” Draghi said.