You are at:Home»Relative Value Channel»Dow Falls as U.S. Trade Deficit Rises in December 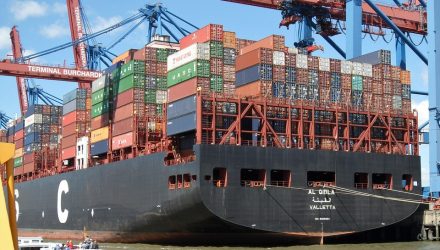 The Dow Jones Industrial Average fell as much as 150 points on Wednesday as investors digested news that the trade deficit went 12.8 percent higher in December.

The month of December saw a $79.5 million goods deficit compared to the $70.5 billion figure in November. The rise in the deficit came as exports declined $4 billion to $135.7 billion, while imports increased by $5 billion to $215.2 billion.

The rise in the deficit comes as U.S. President Donald Trump is in the middle of trade negotiation with China. Trump has expressed his flexibility with moving the March 1 trade deadline to get a deal done, but the markets will still be news-sensitive in the meantime until a permanent trade deal materializes.

“If his goal was to make it as boring as possible so as to not disturb markets, he succeeded,” said Ed Yardeni, president and chief investment strategist at Yardeni Research. “That’s a compliment because Powell’s previous off-the-cuff style caused a lot of market havoc. Powell has learned during his short tenure as Fed chairman that consistent messaging is key.”