You are at:Home»Relative Value Channel»Defense ETFs: Hypersonic Weapons Could Be Next Frontier 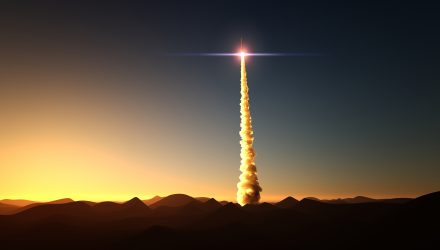 Defense ETFs: Hypersonic Weapons Could Be Next Frontier

Hypersonic weapons that can travel at an extremely high rate of speed could be the next frontier in technology that could fuel defense exchange-traded funds (ETFs). The technology is already being tested by the Russian Navy, which is the first country to use hypersonic missiles.

“The Russian Navy is expected to be the first country to field hypersonic cruise missiles on its submarines, potentially giving it some strategic advantages in naval warfare,” wrote Forbes contributor H I Sutton. “The greater speed will better enable Russia to strike time-critical targets and will increase the missile’s survival rate against modern air defenses.”

The missile is said to have the capability of reaching speeds over 6,000 miles per hour, which could take high-speed warfare to another level.

“The plan, originally reported in Russian sources in March, is for the first test launch from a submarine to take place next year,” wrote Sutton. “This will involve firing a Zircon type missile from the latest nuclear powered cruise missile submarine K-561 Kazan, which is already armed with subsonic and supersonic missiles. The timing may have been prophetic given Russian President Vladimir Putin’s quip to sell hypersonic missiles to President Donald Trump during the G20 summit in Osaka, Japan, at the end of June. The U.S. has been researching similar technologies but does not have an equivalent weapon in its inventory.”

“Zircon can reportedly fly at Mach 8 (i.e. 8 times the speed of sound) with some estimates being even higher,” Sutton added. “For comparison the Tomahawk cruise missiles carried by U.S. Navy and Royal Navy submarines fly at around Mach 0.75.”

Investors can look at defense ETFs like the iShares U.S. Aerospace & Defense ETF (BATS: ITA). ITA seeks to track the investment results of the Dow Jones U.S. Select Aerospace & Defense Index composed of U.S. equities in the aerospace and defense sector. The fund generally invests at least 90% of its assets in securities of the underlying index and in depositary receipts representing securities of the underlying index, which measures the performance of the aerospace and defense sector of the U.S. equity market. Aerospace companies in the index include manufacturers, assemblers and distributors of aircraft and aircraft parts.

For a broad market ETF play, investors can opt for the Direxion MSCI Defensives Over Cyclicals ETF (NYSEArca: RWDC). Can defensives continue to outperform cyclicals through the rest of 2019?

RWDC provides a means to not only see defensive sectors perform well, but a way to capitalize on their outperformance compared to cyclical sectors. The fund tilts towards defensive sectors like health care and consumer staples as shown in the fund’s breakdown. Conversely, it shorts names like the top technology giants that skew towards momentum.