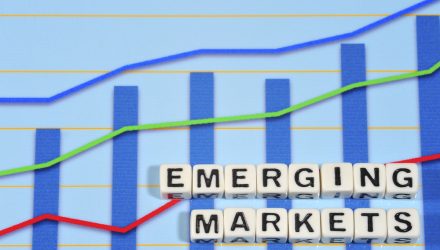 As investors grapple with the economic fallout of COVID-19 and seek to understand its impact, China has become an unexpected stabilizing force in emerging markets. Despite being the epicenter of the outbreak, Chinese equities have experienced lower volatility, minimal currency fluctuation, and less exposure to falling oil prices in the recent market environment in comparison with emerging market peers.

On Feb. 19, 2020, U.S. markets closed at their all-time high. The following days and weeks would see a precipitous drop in global markets, as the pandemic became the primary concern. By March 23, 2020, the S&P Emerging BMI had declined 31.9% to its recent low, in a matter of just over four weeks since signs of slowing started in the U.S. However, not all emerging regions fared equally, and China—the epicenter of the virus and the first to suffer the most drastic economic consequences—outperformed broader emerging markets by more than 20 percentage points in the first quarter (see Exhibit 1). 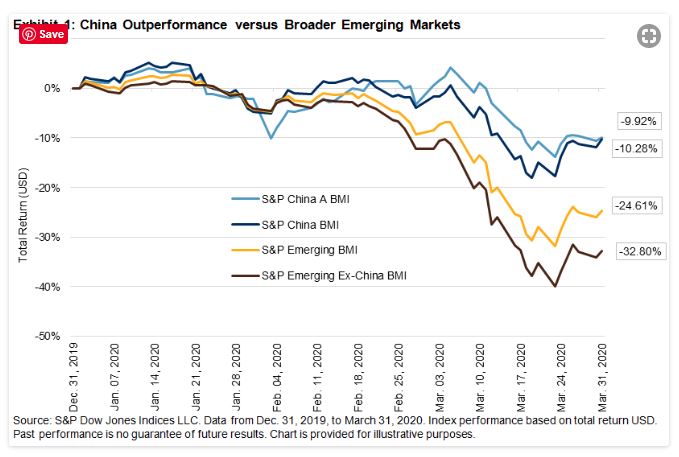 On the other hand, the S&P Emerging Ex-China BMI suffered the worst performance due to its lack of Chinese exposure, trailing the standard emerging benchmark by more than eight percentage points. In prior crises, emerging market benchmarks typically fared more negatively when compared with developed markets—something China exposure has mitigated in the current crisis.

Two of the largest companies in the S&P China BMI—Alibaba (down 11.5% in Q1) and Tencent (down 1.58% in Q1)—both contributed to the outperformance, as each amounts to an approximate 14.0% and 12.8% weight of the index, respectively.

China A-shares, meanwhile, have been notoriously volatile throughout their history, whereas the performance of the S&P China A BMI nearly mimicked its broader counterpart. Recently added into the S&P Emerging BMI at a 25% partial inclusion rate, China A-shares—which account for a 7.0% weight in the S&P Emerging BMI—helped mitigate the emerging market slide.

While economists ponder whether China’s economy now has an advantage by having overcome the virus spread, its status as a non-oil-exporting nation seems to have helped. Even though the S&P China BMI fell 10.3%, oil-exporting countries Brazil and Russia plummeted 50.2% and 35.8%, respectively. In fact, China and Taiwan’s oil-importer status seems to have helped reduce some economic risk.

In the last three months, the realized volatility[1] of the S&P China BMI remained largely below that of the S&P Emerging BMI, particularly as global markets began to price in the full effect of the economic impact. India, Russia, and particularly Brazil had significantly higher volatility during the first quarter. 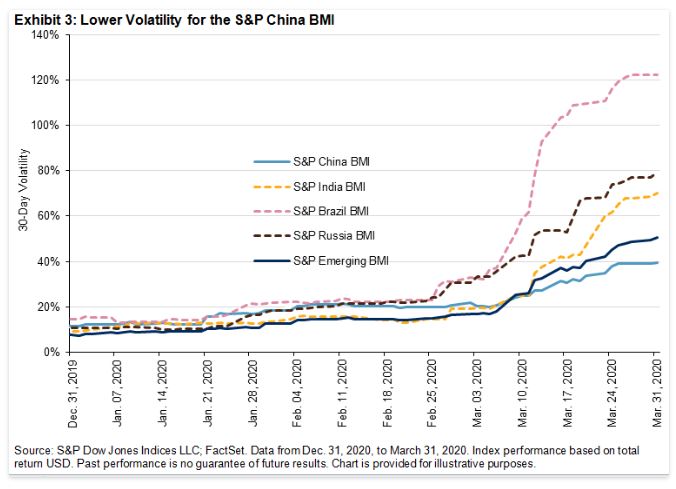 COVID-19 has introduced a large amount of uncertainty into commodity and equity markets, and emerging countries have particularly suffered from the projected impacts. China, although at the epicenter of the crisis, has largely come out ahead of its emerging counterparts, with comparably lower drawdowns and volatility in Q1 2020.