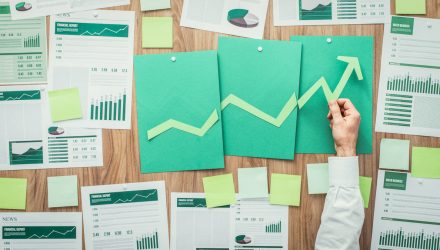 Capitalize on Small-Cap Strength With a Relative Weight ETF

With large-cap stocks being more vulnerable to international trade disputes, small-cap ETFs may be worth considering in the current market environment. Going a step further, investors can harness small-cap strength and large-cap lethargy with the Direxion Russell Large Over Small Cap ETF (NYSEArca: RWLS).

The strength in large caps is certainly something to take note off, particularly when it comes to the Relative Strength Index (RSI) technical indicator–a common tool for traders when assessing whether an ETF is overbought (the index above 70) or oversold (the index below 30). The RSI indicator could be signaling a potential sell-off for large cap equities, which could in turn, shift the tide for small cap equities.

“It has undeniably been quite an extraordinary first four months of the year for broad U.S. markets,” said Direxion in a recent note. “The Russell 1000 gained 18.60% (total return) through April, and Small Cap stocks, as measured by the Russell 2000, provided 18.48% through the end of April. To put that into perspective, the last time we saw both Large Caps and Small Caps provide greater than 18% total returns over four months’ time was in December of 2010.”

Recent momentum in the U.S. dollar and weak inflation could help strengthen the small-cap segment since these smaller companies are more closely tied to the domestic economy than heir larger multi-national peers. Small-caps are more insulated from the negative effects of a strong USD since most of their revenue come from the domestic economy, whereas larger companies have more overseas exposure, so foreign revenues are smaller when converted back to the strong dollar.

Furthermore, the Federal Reserve is likely to stand pat on rates, which would help smaller shops secure lower cost loans.