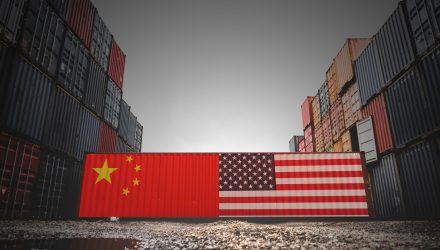 The iShares China Large-Cap ETF (NYSEArca: FXI), one of the largest China exchange traded funds trading in New York, is down nearly 9% year-to-date. Making matters worse is a six-month decline of almost 19% for the benchmark China ETF, but some market observers believe Chinese stocks could be close to bottoming.

Tariff talk and trade war speculation are among the factors plaguing stocks in the world’s second-largest economy and motivating some traders to get bearish on FXI.

State-run Xinhua news agency recently stated that China will maintain its economic growth within a reasonable range and achieve his year’s target despite the challenging trade environment, Reuters reported. Beijing has already pledged to now allow the trade friction to cause large scale unemployment.

“Trade tensions, a major headwind, could ratchet even higher in coming weeks as President Donald Trump floats a proposal for 25 percent tariffs on $200 billion in Chinese goods. That marks a significant escalation from the $34 billion that went into effect at the beginning of July,” reports CNBC.

Larry McDonald, editor of the Bear Traps Report, said in an interview with CNBC that selling pressure in FXI could abate in the coming weeks. While FXI is struggling this year, the fund’s year-to-date inflows are close to $460 million.