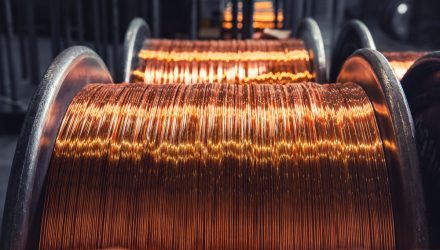 Recession Fears Deal a Blow to Once High-Flying Copper ETFs

Copper-related exchange traded funds have been taking a beating as fears of a global recession have weighed on the demand outlook for industrial metals.

Meanwhile, Comex copper futures were now hovering around $3.4295 per pound, compared to a record high of $4.9375 back in early March.

Multiple factors are weighing on the demand outlook with the threat of inflation looming, such as Europe’s gas crisis, a U.S. slowdown, and renewed virus concerns in China, Bloomberg reported.

Copper prices also suffered a 4.2% slump on Tuesday, falling to their lowest close in 19 months, followed by almost 5% on Wednesday before paring some losses.

“Copper’s caught a bit of a bid that’s lifted it off the lows, but we’re certainly expecting more downside,” Geordie Wilkes, head of research at Sucden Financial Ltd., told Bloomberg. “We’re not in a recession yet but we’re certainly seeing slower growth, and so there aren’t any real prospects for copper to rally meaningfully from here.”

Q2 of 2022 also marked the worst for metals since the financial crisis of 2008. Looking ahead, these concerns will continue to weigh on markets as recession fears remains an overarching theme.

The shift in sentiment is a stark contrast to the environment in March when the LMEX Index of six metals surged to an all-time high amid concerns that Russia’s attack on Ukraine would trigger widespread shortages.

Meanwhile, the Federal Reserve is looking at multiple interest rate hikes to curb inflationary pressures, which the markets warn could trigger the next economic recession.

“There is no bullish news at the moment, really,” Fan Rui, an analyst with Guoyuan Futures Co., told Bloomberg. “Europe, US are facing risks of recessions and can hardly contain inflation, which will lead to monetary tightening that is bearish for copper, while in China, the economy is facing a double blow from the flare-up of new cases and a weaker-than-expected demand recovery.”