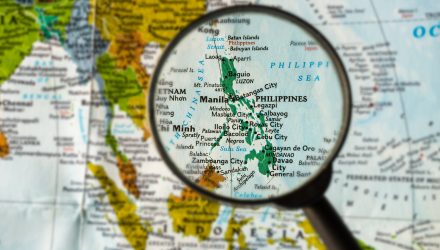 “The Philippines has also maintained fiscal policies geared towards a sustained decline in the gross general government debt (GGGD) ratio,” adds Fitch. “GGGD is projected by Fitch to decline to around 34% of GDP at end-2017, below the ‘BBB’ median of 41.1% of GDP. The recent appointment of a new central bank governor from within the Bangko Sentral ng Pilipinas (BSP) has provided continuity and supports monetary policy credibility. We expect inflation to remain within the BSP’s target range of 2%-4%. A continuation of exchange rate flexibility should help preserve the recent build-up of foreign exchange reserves.”

EPHE allocates 28.5% of its weight to financial services stocks and almost 24% to real estate names. The industrial sector is 23.5% of the fund’s weight.

“Fitch expects the Philippines’ fiscal profile to improve as a result of the government’s tax reform initiative,” said the ratings agency. “The House of Representatives and Senate have passed their respective versions of the first component of a five-part comprehensive tax reform programme, which may be signed into law before the year’s end. We estimate the bill to be net revenue positive, reflecting an expansion of the VAT base and higher taxes on petroleum products, automobiles and on sugar sweetened beverages, which would more than offset a lowering of personal income taxes.”