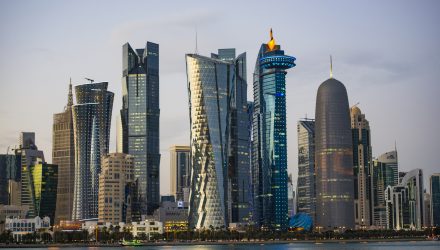 Qatar’s equity market and country-specific ETF climbed Monday on hopes that Doha’s diplomatic disputes with its Arab neighbors will be resolved.

Investors latched onto the news, betting that Sheikh Tamim’s attendance will be a step towards renewed dialogue with Saudi Arabia, the United Arab Emirates, Bahrain and Egypt.

Qatar’s stock index, which has been hovering near six-year lows, continues to trade 20% below levels prior to the Arab states’ imposed sanctions on Qatar in June.

According to the Associated Press, the Arab countries’ demands of Qatar on June 22 include limiting diplomatic ties to Iran, shutting down the state-funded Al-Jazeera satellite news network and other media outlets, and severing ties to all “terrorist organizations,” including the Muslim Brotherhood and Lebanon’s Hezbollah, Fox News reports. They also demanded Qatar expel the Turkish troops stationed in the country, along with reparations and an audit.