You are at:Home»Featured»Was Q1 only the start of herd mentality in the market? 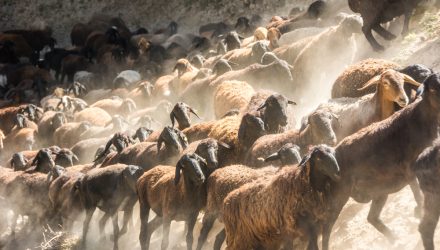 Was Q1 only the start of herd mentality in the market?

In his 2004 bestseller The Wisdom of Crowds, James Surowiecki famously provides evidence that when acting independently and in their own self-interest, the actions of individual members of a crowd result in an efficient outcome. Following this logic, if investors act independently in their pursuit of excess returns, the market will be efficient. Of course, the title of Surowiecki’s book is a nod to the classic tome by Charles Mackay, Extraordinary Popular Delusions and the Madness of Crowds (emphasis mine). What happens when the individuals in a crowd behave systematically similarly, not independently?

Look no further than the past year for the answer to that question. There are plenty of reasons to explain why the market has done well: fiscal stimulus, monetary stimulus, the realization that the pandemic didn’t have the economic impact many feared, to name a few. But certain individual stocks are clearly being impacted by the madness of crowds. We have seen this in huge mega-cap stocks and we have seen it among stocks facing bankruptcy. When crowds form, and humans, being social beings, begin letting each other influence their decision making, bubbles often form.

I am not here to tell you the market is in a bubble. Too much ink has been spilled over the last decade among pundits trying to call the top, who have largely all been wrong. However, there are, and always will be, bubbles in individual stocks. These are the stocks with prices that have been impacted by investors interpreting vague and ambiguous information in a systematically incorrect way. That is, the herd speaks louder than the individual. In such a situation, even Surowiecki concedes a breakdown in price efficiency.

Today’s environment is replete with information that is relevant to stock prices, but vague enough or ambiguous enough to allow investors to interpret it incorrectly. Consider the turbulent stock of Tesla, soaring through most of 2020 before its recent 30% drop. While the company might be strong and promising, the behavior around the stock price could be a problem. A group of investors systematically over- or underconfident in a company can send the stock rocketing to record valuations or careening downward. The lesson is simple: When vague or ambiguous information abounds, prices will behave wildly.

The solution to this problem is to avoid the madness. Avoid the vague and ambiguous information. This is our goal at New Age Alpha and the first quarter of 2021 has provided ample opportunity to do so. We believe our U.S. Large-Cap Leading 50 Index offers evidence of this. The Index is part of our index family and employs our rules-based, proprietary methodology to select 50 stocks that we believe have the least vague and ambiguous information impacting the stock price. In the first quarter of 2021, the Index outperformed the S&P 500® Index by 211 basis points. Additional performance information can be found below:

So far in 2021 the focus has surrounded the steep climb of yields as measured by the ten-year Treasury and the risk this may create for valuations. Surowiecki, however, may have something to say about investor’s ability to correctly interpret such expectations. Particularly when, historically, we rarely see the most common fear come to fruition as expected. More likely it’s a variant or a slightly different tipping point that causes upheaval in an unforeseen way. And the reason risk rarely works in such a linear fashion is because it originates in human behavior. At New Age Alpha, we accept this and make it work to our advantage. We don’t attempt to predict the future but, instead, only focus on the known information. So, as examples, we’re also currently hearing concerns about an uptick in inflation or the continued chorus of valuation worries. Yet, has anyone considered:

The list goes on. With strong tailwinds from both Reopening and additional stimulus, it feels as if the market’s concerns have shifted to thoughts of too much tailwind, forgetting any sort of headwind can exist. In our view, this is human behavior at its worst and something we seek to avoid. In the examples above, we don’t intend to be doomsayers but, rather, we attempt to illustrate the elusive nature of risk. We do not truly believe any of these scenarios might or will come to pass precisely because such situations rarely occur as envisioned. We merely point out that there are risks related to human behavior that no one is taking into account. And that’s exactly why we use the actuarial processes similar to those used by insurance companies to focus on the known data in the financial world…in 2Q21 and going forward.

New Age Alpha’s proprietary Human Factor methodology is designed to deal with the vague and ambiguous information in the stock market. As conjecture and speculation have overtaken disciplined analysis, the Human Factor – the probability a company will fail to deliver the growth implied by its stock price – has become pronounced. As of March 31, 2021, the median Human Factor of all companies in the S&P 500® sits at 53.4%, compared to an historical average of 47%.

If the second quarter of 2021 is anything like the preceding five quarters, we should expect the unexpected. No one saw the pandemic coming, much less the near-instantaneous recovery of the market while still in the throes of it. And, going one step further, who could’ve anticipated the rise of the “retail investor” as a result? The sequence of events blew apart prognosticator’s carefully structured analysis worldwide. To try to predict what will happen next is folly. We believe the only approach that works across all time periods and all market cycles is the avoidance of the risk of human behavior.