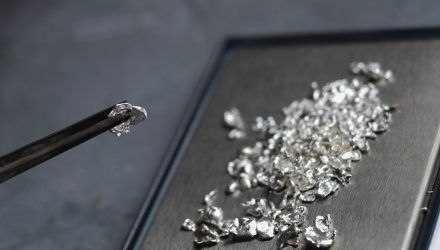 The weakness in gold is making its way to other precious metals and the related exchange traded funds. That includes platinum and the ETFS Physical Platinum Shares (NYSEArca: PPLT).

With Friday’s loss, PPLT slumped by about 6.5% last week, extending its monthly loss to nearly 5% and its year-to-date loss to over 16%.

“Platinum prices tumbled to 10-year lows as the collapse of Turkey’s lira rippled through markets and weakened the currency of top producer South Africa, underlining persistent oversupply of the autocatalyst metal,” reports Reuters.

Getting Bearish on Platinum

“Once much more valuable than gold and palladium, platinum has tumbled 25 percent from January highs to below $780 an ounce. This week it hit its lowest since October 2008 and a new record low relative to gold,” according to Reuters.