You are at:Home»Investing»Protests Have Taken Toll on Hong Kong ETF 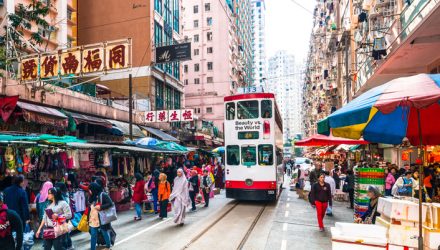 ETF investors and global traders have yanked billions out of Hong Kong markets since April as anti-government protests stretched out and intensified.

According to the Bank of England, investors have pulled $5 billion out of Hong Kong, or 1.25% of the Asian financial hub’s gross domestic product, due to the growing protests, the Financial Times reports.

ETF investors have also been dumping exposure to the volatile city. The iShares MSCI Hong Kong ETF (NYSEArca: EWH) has experienced $1.2 billion in outflows over 2019.

The protests began mid-March across the city after the government proposed a controversial extradition bill, and violence escalated since June. The city has since slipped into a recession with a number of sectors under duress.

“The protests, and their impact on the real economy, highlight political risk as a key vulnerability in Hong Kong. And these political tensions pose risks, given Hong Kong’s position as a major financial center,” the Bank of England said.

“UK banks have significant exposure to Hong Kong,” equivalent to 160% of their common equity tier 1 capital, or core capital, the BoE noted. The trouble in Hong Kong was particularly noteworthy for the United Kingdom given the exposure of big U.K. banks like Standard Charter and HSBC to the former British territory.

However, the sizeable outflows out of Hong Kong’s markets, notably in April and May, may have been attributed to “an escalation of the [U.S.-China] trade war,” Kevin Lai, Daiwa Capital Markets chief economist for Asia excluding Japan, told the FT.

Investors have been taking money out of Hong Kong funds since 2017 due to an economic slowdown in China and the escalation of the trade war. “Protests are just the icing on the cake,” Lai added.

BoE data also showed that the bulk of investment fund outflows occurred prior to the violent demonstrations and before the negative effect on Hong Kong’s economy.